The article’s two key hypotheses are right there in the title: People who are faced with a goal conflict are (1) more likely to spend time on work and (2) less likely to spend time on leisure. This is because “goal conflict increases reliance on salient justifications” and “work tends to be easier to justify and leisure harder to justify” (Abstract).

We contacted the authors to request the materials needed to conduct a replication. They were forthcoming, thorough, and polite. They immediately shared the original Qualtrics file that they used to conduct that study, and we used it to conduct our replication. They also promptly answered a few follow-up questions, and provided us with data that allowed us to better compare the results of our replications and their original study. We are very grateful to the authors for their help and professionalism.

In the pre-registered replications [2], we used the same survey as in the original study, and therefore the same instructions, procedures, stimuli, and questions. These studies did not deviate from the original study in any discernible way, except that our consent form was necessarily different, and our exclusion rules were slightly different [3]. After exclusions, we wound up with 1,008 participants in Replication 1 and 1,127 participants in Replication 2 (~5 times the original sample size). You can (easily!) access all of our pre-registrations, surveys, materials, data, and code on ResearchBox (.htm).

Participants then moved on to a separate book-browsing task, which was either described as work or leisure, as shown here:

Participants then engaged in the book-browsing task itself. Here is how it looked:

If participants clicked the box next to any of the books, the book’s description would appear below this array. They could spend as little or as much time on the task before proceeding, up to an undisclosed limit of 300 seconds, at which point the survey auto-advanced to the next screen.

The primary dependent measure was the time participants spent on this screen.

After this task, participants completed some manipulation check measures, an attention check, and some demographic questions.

As in the original article, our critical dependent measure was the natural log of seconds spent on the book browsing task [4]. Here are the original vs. replication results: 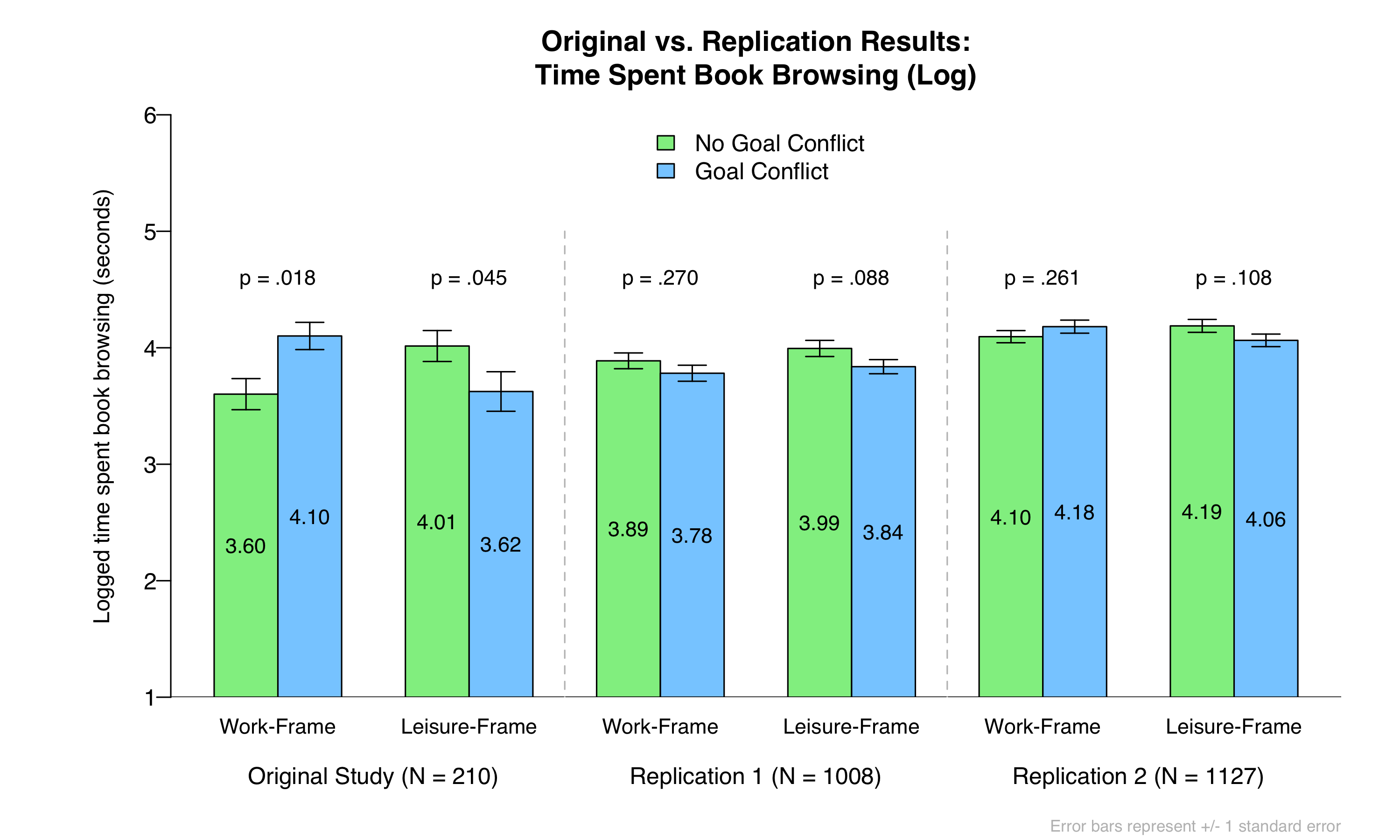 Let’s consider each of the two independent hypotheses.

Second, did writing about goal conflict decrease the time spent on the book-browsing task when it was framed as leisure? Although this effect is not significant in either of our replications, we do find directional and marginally (or close-to-marginally) significant support for it in both. Nevertheless, the effect sizes we observed (ds = -.13 and -.15) are much smaller than what was reported in the original (d = -.34), again indicating that the original study had only 10-12% power to detect such an effect. You’d need ~800 per cell to have 80% power to detect effects of that size (i.e., ds of about -.15).

On balance, then, these replications were not successful. If the effects exist, they could not have been detected in the original study [6].

What About Data Quality?

Although no one can ever definitively rule out that a replication failed because of either lower data quality or the mere passage of time, it is worth noting that our descriptive statistics and data quality seem comparable to the original study.

Second, after the book browsing task, participants answered questions designed to serve as a check on the effectiveness of the goal conflict manipulation. Just as in the original study, we found a highly significant effect of goal conflict on this measure (ps < 10-10).

"We were encouraged to see the overall pattern of results from the original study emerge in the second, higher-quality replication sample, as well as in the leisure frame condition of the first sample (although with smaller effect sizes).

Further, as footnoted in Data Colada’s post, in the second replication, the interaction predicted in the paper is also significant. Although we appreciate Data Colada’s rationale for interpreting our time spent hypothesis as two simple effects, not all experiments in the paper test such separate time spent on work versus leisure (i.e., consider relative time allocated to work versus leisure instead). We acknowledge that the wording of our paper title and time spent prediction resulted in some (unintended) ambiguity regarding germane tests of our theory.

We also note that the context in which the replications were run—December 2020, at the height of the COVID-19 pandemic in the United States—may be relevant. Indeed, reviewing the data, the pandemic appears regularly in participant responses, with some even referencing it to counterargue the goal conflict manipulation. While we were glad the goal conflict manipulation check worked, the ongoing upheaval in participants’ daily lives and personal goals may have nevertheless impacted how they were influenced by the prompt. Moreover, the pandemic has created widespread change in how people both engage in and experience work and leisure (e.g., Giurge, Whillans, and Yemiscigil 2021; Kniffin et al. 2021; Lashua, Johnson, and Parry 2021; Sugar 2020, .html). Although the replication (consistent with the original study) does not include a work-leisure manipulation check, we surmise that sensitivity to the work-leisure manipulation (framing time spent on the same online book browsing task as a “leisurely” vs. “productive” activity) may be influenced by this broader context.

Overall, we appreciate the Data Colada team’s interest in this research and support the replication effort. We hope this may increase interest in advancing understanding of goal conflict and its effect on time use."