A recent Psych Science (.pdf) paper found that sports teams can perform worse when they have too much talent.

The hypothesis is easy enough to articulate, but pause for a moment and ask yourself, “How would you test it?"

This post shows the most commonly used test is incorrect, and suggests a simple alternative.

What test would you run?
If you are like everyone we talked to over the last several weeks, you would run a quadratic regression (y=β0+β1x+β2x2), check whether β2 is significant, and whether plotting the resulting equation yields the predicted u-shape.

We browsed a dozen or so papers testing u-shapes in economics and in psychology and that is also what they did.

That’s also what the Too-Much-Talent paper did. For instance, these are the results they report for the basketball and soccer studies: a fitted inverted u-shaped curve with a statistically significant x2. [1]

Everybody is wrong
Relying on the quadratic is super problematic because it sees u-shapes everywhere, even in cases where a true u-shape is not present. For instance:

The source of the problem is that regressions work hard to get as close as possible to data (blue dots), but are indifferent to implied shapes.

First, plot the raw data.
Figure 2 shows how plotting the data prevents obviously wrong answers. Plots, however, are necessary but not sufficient for good inferences. They may have too little or too much data, becoming Rorschach tests. [3]

These charts are somewhat suggestive of a u-shape, but it is hard to tell whether the quadratic is just chasing noise. As social scientists interested in summarizing a mass of data, we want to write sentences like: “As predicted, the relationship was u-shaped, p=.002.”

Those charts don’t let us do that.

If that’s what we want to assess, maybe that’s what we should test.Here is an easy way to do that that builds on the quadratic regression everyone is already running.

1)      Run the quadratic regression
2)      Find the point where the resulting u-shape maxes out.
3)      Now run a linear regression up to that point, and another from that point onwards.
4)      Test whether the second line is negative and significant.

One demonstration
We contacted the authors of the Too-Much-Talent paper and they proposed running the two-lines test on all three of their data sets. Aside: we think that's totally great and admirable.
They emailed us the results of those analyses, and we all agreed to include their analyses in this post.

The paper had predicted and documented the lack of a u-shape for Baseball. The first figure is consistent with that result.

The authors provided a detailed discussion of these and additional new analyses (.pdf).

We thank them for their openness, responsiveness, and valuable feedback.

Another demonstration
The most cited paper studying u-shapes we found (Aghion et al, QJE 2005, .html) examines the impact of competition on innovation.  Figure 3b above is the key figure in that paper. Here it is with two lines instead (STATA code .do; raw data .zip): 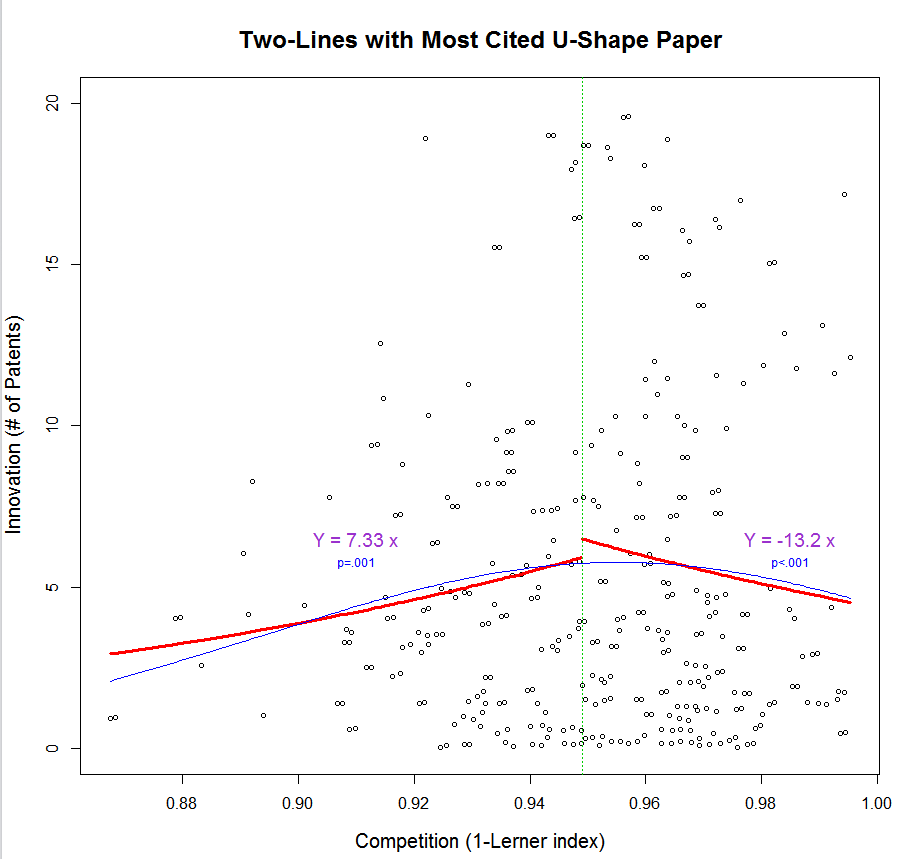 If you are like us, you think the p-value from that second line adds value to the eye-ball test of the published chart, and surely to the nondiagnostic p-value from the x2  in the quadratic regression.

If you see a problem with the two lines, or know of a better solution, please email Uri and/or Leif