A friend recently asked for my take on the Miller and Sanjurjo's (2018; pdf) debunking of the hot hand fallacy. In that paper, the authors provide a brilliant and surprising observation missed by hundreds of people who had thought about the issue before, including the classic Gilovich, Vallone, & Tverksy (1985 .pdf).

In this post:
(1) I try to provide an intuitive explanation for the Miller & Sanjurjo critique, and
(2) explain why I still believe in the hot hand fallacy [1].

Hot hand fallacy: people believe the hot hand is bigger than it is :
hot hand fallacy:      P̂(H|HHH) > P(H|HHH)
notation: P̂( H|HHH) is read as "predicted probability of making the next shot:  P̂(H, after 3 shots are made  |HHH)".

Importantly, both can coexist. For example, Steph Curry might convert 45% of his three-point shots in general, increasing to 50% after making two in a row, but people believe it increases to 60%.

Claims about sports vs about thinking
Gilovich et al 1985 made two central claims: (1) the hot hand is basically zero, and (2) people over-perceive hot hands. Miller and Sanjurjo found evidence consistent with the hot hand in Gilovich et al's data, contradicting claim (1); it is not wrong to believe in the hot hand to some degree. I am hopeful (as are they) that their findings will refocus the field's attention to claim (2) which I find more important for behavioral science.  This quote from Matthew Rabin (2002; .pdf), describing the phenomenon with the more accurate label "hot hand bias", captures the perspective I hope we will all move towards (p.805):

Gilovich, Vallone, and Tversky [1985] […] demonstrated that, while basketball fans believe that basketball players are streak shooters […] such a hot hand does not in fact exist (or at least not nearly to the degree that people believe in it).

To be clear, Miller & Sanjurjo's discovery must be taken into account also when studying the second claim. I do so here.

Hot hand artifact
To determine if there is a hot hand, we must compare the players’ likelihood to make a shot after a streak, P(H|streak), to some benchmark. The benchmark that researchers have used is the overall probability of making a shot: P(H). This assumes that, in the absence of a “hot hand”, we should see P(H|Streak)=P(H).  Miller and Sanjurjo discovered that this is incorrect given the way researchers have defined “streak”. This leads researchers to under-detect true hot hands, and therefore to overestimate the magnitude of the hot-hand fallacy. I refer to this issue as the 'hot hand artifact' [2].

To understand the hot hand artifact, we need to differentiate between streaks and substreaks:

If you flip a coin 3 times and get Heads three times:

I next simply state the hot hand artifact, I explain it afterwards.

But if you look at substreaks, that's not true.
After a substreak of HH, the probability of another H is <50%.
That’s extremely nonintuitive, so let's go over it in baby-steps.

Let's represent a substreak by putting a '__' before the Hs; thus a substreak of 3 is _HHH.
Then, we have this definition of the hot hand artifact, with say 3 hits:

Initial intuition for why substreaks matter: Why P(H|_H)<P(H)?
Imagine a weird coin that always comes up Heads 10 times in a row, then 1 Tails, then 10 Heads, then 1 Tails, etc.

Second baby step: a normal coin
I now reproduce the 1st example in Miller & Sanjurjo 2018, doing the hot hand artifact calculations for a 50:50 coin tossed three times. I explain it a bit differently, but it is the same example (see their Table 1 .png). 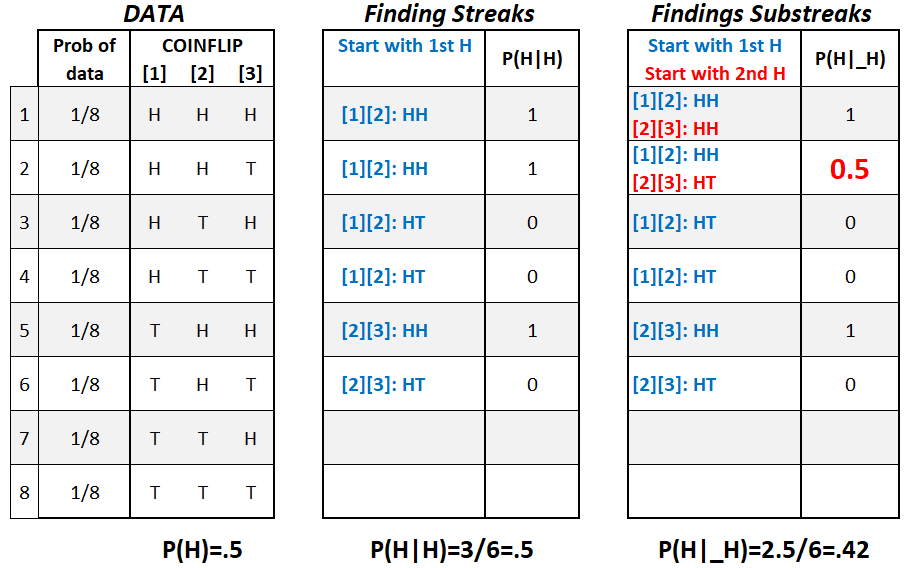 Here is another way of thinking about it. There are two stages. First, data are generated. There is no bias there, coin is unbiased. Second, we search the data for substreaks, and our search is biased. If we find an HT we stop the search, if we find HH we keep looking, thus giving HT more chances.

How the hot hand artifact challenges the evidence of the hot hand fallacy
Having understood streaks vs substreaks, and why P(H|_H)<P(H) let's see why this matters for hot hand research.

To study the hot hand fallacy, then, we need to compare P̂() and P(),perceived and real hand-hotness.

We estimate the former from participants, asking: "when a player makes 3 in a row, how likely are they to make a 4th?". We estimate the latter from 'real' data (e.g., NBA data), and it is in the real data that the hot hand artifact matters. This is because researchers have looked for substreaks rather than streaks.

Researchers looked at how often players hit a shot after 3 in a row, without restricting the search to having made only 3 in a row. Looking at substreaks of shots has led researchers to under-estimate real hand-hotness. This is simply a brilliant insight by Miller and Sanjurjo.

In words, it is possible that rather than people over-estimating hot hands, researchers under-estimated them.

Finding 1. Two free-throws
Gilovich et al. report that participants expected an NBA player with a 70% free-throw average to make 74% of shots after making one, and 66% after missing one. An 8% difference in the estimate of P̂(H|H) – P̂(H|M).

Gilovich et al contrasted that 8% in perceived streakiness, with their estimated actual streakiness of NBA free-throws: 0% [4]  Because free-throws were analyzed in sets of two, there are no substreaks, no hot hand artifact.

Miller & Sanjurjo discussed these data in their footnote 22, which I have transcribed, and commented on, in this footnote [5]

Finding  2. 100 single-shot predictions.
Another result by Gilovich et al which is not threatened by the hot hand artifact is Study 4, where 26 varsity players took 100 shots each, predicting each time if they would make the next shot (putting money on the line). While here we do look at substreaks, a previous hit may have been preceded by other hits, we are contrasting shots after substreaks with predictions after the same substreak, so the hot hand artifact cancels out.

My favorite fact for this post: calibration of massiveness of hot hand fallacy
It is worth noting that expecting r=.40 for consecutive shots (see chart above) implies implausibly strong hand-hotness. As a calibration, I simulated a player that when cold (previous shot was missed) makes as few shots as the NBA player with the lowest shooting percentage in the 2019-2020 season (Taurean Prince: 37.6%), but then gets dramatically better with each basket that he makes until, after three consecutive hits, he acquires the best shooting percentage in the league, 74.2%, that of Mitchell Robinson. In a series of 100 shots, this impossibly hot-handed player would on average have a correlation of r=.17 for two consecutive shots (R Code).

In the Gilovich et al study, and in the Israeli replication, people expected their hand-hotness to be more than twice this implausible upper bound. [7].

I am using what participants predicted ("hit" vs "miss") as a proxy for the probability they assigned a hit or a miss. This is more of a leap of faith than seems at first, but I think a reasonable one. See footnote for details [8]

Conclusions
The hot hand artifact discovered by Miller and Sanjurjo is extraordinarily nonintuitive and it was pursued in an extremely clever, thorough, and elegant manner. But, when we focus on the evidence supporting the hot hand fallacy, the psychologically interesting, and practically consequential finding that people misinterpret meaningless random noise as meaningful streaks that they fallaciously expect to persist, that evidence is not challenged by the hot hand artifact.

Author feedback.
Our policy (.htm) is to share drafts of blog posts that discuss someone else's work with them to solicit suggestions for things we should change prior to posting. I shared a draft with Tom Gilovich, who made some suggestions and expressed agreement with the emphasis on the psychologically interesting question of over-perception of streakiness. I also shared a draft with Adam Sanjurjo and Joshua Miller with whom I discussed several aspects of the analyses and additional papers that were relevant. The conversation was polite, constructive, interesting, and very pleasant. In response to this conversation I added footnotes 1 & 8.  After our conversation two key disagreements remained. In their words:  "While we believe that Uri's characterization of Gilovich et al 1985's two claims that '(1) there is no hot hand, and (2) the hot hand is overperceived' is technically correct, it perhaps fails to convey exactly what the original, and many subsequent, authors long took 'overperceive' to mean. In particular, to them it meant perceiving something that does not exist, not, for example, perceiving something more than one ought to, or more frequently than one ought to. Second, we believe that the bets placed in Gilovich et al (1985)'s study are only minimally informative about what bettors' subjective probability estimates might be."