Bertrand & Mullainathan (2004, .htm) is one of the best known and most cited American Economic Review (AER) papers [1]. It reports a field experiment in which resumes given typically Black names (e.g., Jamal and Lakisha) received fewer callbacks than those given typically White names (e.g., Greg and Emily). This finding is interpreted as evidence of racial discrimination in labor markets .

Deming, Yuchtman, Abulafi, Goldin, and Katz (2016, .htm) published a paper in the most recent issue of AER. It also reports an audit study in which resumes were sent to recruiters. While its goal was to estimate the impact of for-profit degrees, they did also manipulate race of job applicants via names. They did not replicate the (secondary to them) famous finding that at least three other studies had replicated (.ssrn | .pdf | .htm). Why? What was different in this replication? [2]

Small Telescope Test
The new study had more than twice the sample size (N = 10,484) of the old study (N = 4,870). But it also included Hispanic names, the sample for White and Black names was nevertheless about 50% larger than for the old study.

Callback rates in the two studies were (coincidentally) almost identical: 8.2% in both. In the famous study, Whites were 3% percentage points (pp) more likely to receive a call-back than non-Whites. In the new study they were 0.4% pp less likely than non-Whites, not significantly different from 0%, χ2(1)=.61, p=.44 [3].

The small-telescopes test (SSRN) asks if a replication result rules out effects big enough to be detectable by the original. The confidence interval around the new estimate spans -1.3% pp against Whites to +0.5% pp pro-White. For the original sample size, an effect as small as that upper end, +.5% pp, would lead to a meager 9% of statistical power. The new study's results are inconsistent with effects big enough to be detectable by the older study, so we accept the null. (For more on accepting the null: DataColada[42].)

Why no effect of race?
Deming et al. list a few differences between their study and Bertrand & Mullainathan's, but do not empirically explore their role [4]:

In addition to these differences, the new study used a different set of names. They are not listed in paper, but the first author quickly provided them upon request.

In DataColada[36], I wrote about a possible Socioeconomic Status (SES) confound in Bertrand and Mullainathan (2004) [5]. Namely, their Black names (e.g., Rasheed, Leroy, Jamal) seem low SES, while the White names (e.g., Greg, Matthew, Todd) do not. The Black names from the new study (e.g., Malik, Darius and Andre) do not seem to share this confound. Below is the picture I used to summarize Colada[36], I modified it (with green font) to capture why I am interested in the new study's Black names [6]. 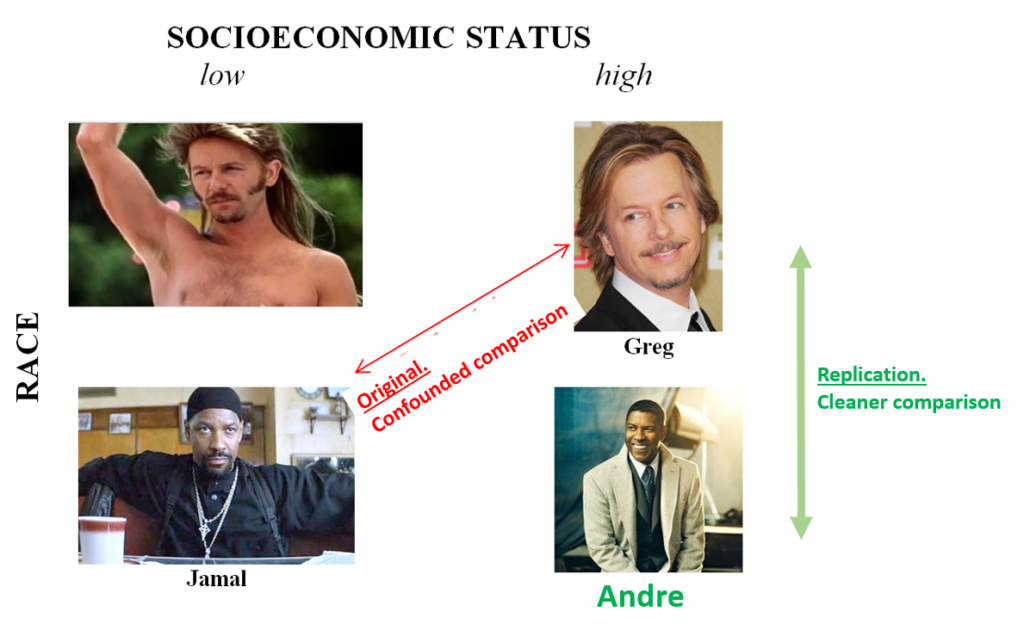 But I am a Chilean Jew with a PhD, my own views on whether a particular name hints at SES may not be terribly representative of that of an everyday American. So I collected some data. 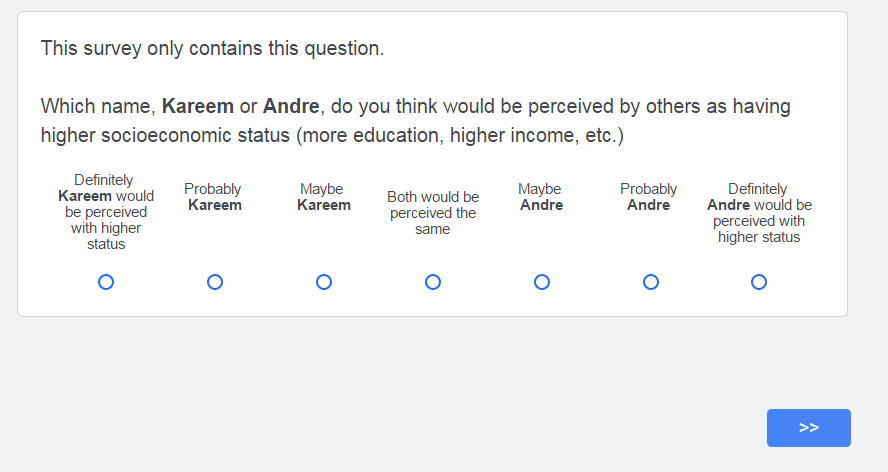 Each respondent saw one random pair of names, in counterbalanced order. The results were more striking than I expected [7]. 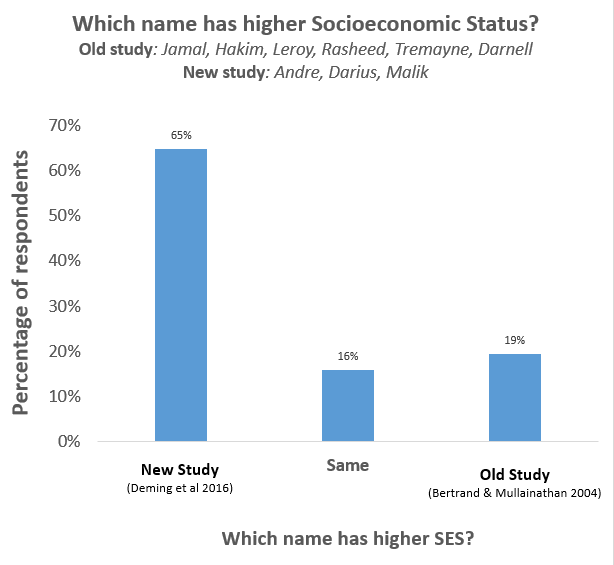 Note: Tyrone was used in both studies so I did not include it.

Study 2
One possible explanation for Study 1’s result (and the failure to replicate in the recent AER article) is that the names used in the new study were not perceived to be Black names. In Study 2, I asked N=201 MTurkers to determine the race and gender of some of the names from the old and new studies [8]. 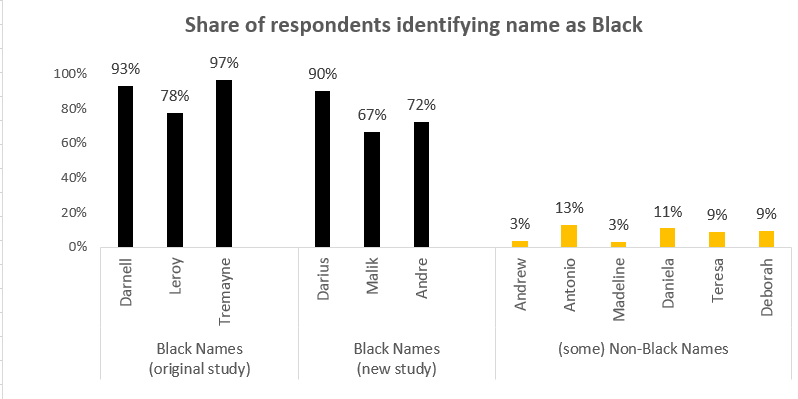 In Sum.
The lower callback rates for Jamal and Lakisha in the classic 2004 AER paper, and the successful replications mentioned earlier, are as consistent with racial as with SES discrimination. The SES account parsimoniously also explains this one failure to replicate the effect. But this conclusion is tentative as best, we are comparing studies that differ on many dimensions (and the new study had some noteworthy glitches, read footnote 4). To test racial discrimination in particular, and name effects in general, we need the same study to orthogonally manipulate these, or at least use names pretested to differ only on the dimension of interest. I don't think any audit study has done that.

Author feedback.
Our policy is to contact authors whose work we discuss to request feedback and give an opportunity to respond within our original post. I contacted the 7 authors behind the two articles and received feedback from 5 of them. I hope to have successfully incorporated their suggestions; they focused on clearer use of "replication" terminology, and broader representation of the relevant literature.