How to test this?
To empirically assess the consequences of forcing researchers to replace p-values with confidence intervals we could randomly impose the requirement on some authors and see what happens.

That's hard to pull off for a blog post.  Instead, I exploit a quirk in how "mediation analysis" is now reported in psychology. In particular, the statistical program everyone uses to run mediation reports confidence intervals rather than p-values.  How are researchers analyzing those confidence intervals?

Sample: 10 papers
I went to Web-of-Science and found the ten most recent JPSP articles (.html) citing the Preacher and Hayes (2004) article that provided the statistical programs that everyone runs (.pdf). 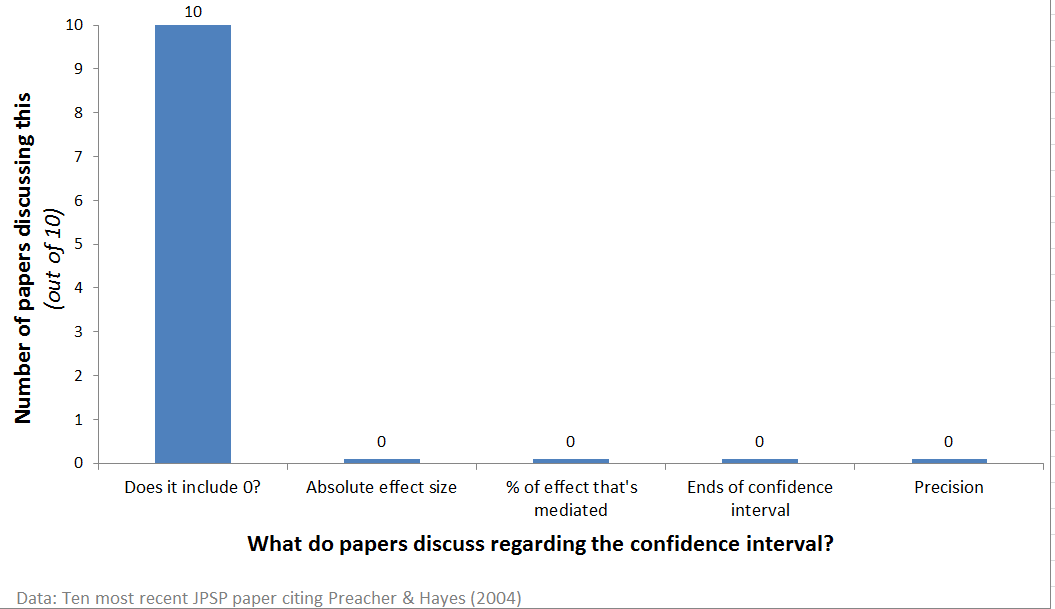 This sample suggests confidence intervals do not change how we think of data.

If people don’t care about effect size here…
Unlike other effect-size estimates in the lab, effect-size in mediation is intrinsically valuable.

No one asks how much more hot sauce subjects pour for a confederate to consume after watching a film that made them angry, but we do ask how much of that effect is mediated by anger; ideally all of it. [1]

I have not been persuaded yet. Effect size matters outside the lab for sure. But in the lab not so clear. Our theories don't make quantitative predictions, effect sizes in the lab are not particularly indicative of how important a phenomenon is outside the lab, and to study effect size with even moderate precision we need  samples too big to plausibly be run in the lab (see Colada[20]). [2]

My talk at a recent conference (SESP) focused on how research questions should shape the statistical tools we choose to run and report. Here are the slides (.pptx). This post is an extension of Slide #21.