A PNAS paper (.htm) proposed that people object “to experiments that compare two unobjectionable policies” (their title). In our own work (.htm), we arrive at the opposite conclusion: people “don’t dislike a corporate experiment more than they dislike its worst condition” (our title).

In a forthcoming PNAS letter, we identified a problem with the statistical analysis in the PNAS paper. Correcting the problem eliminates experiment aversion for the 7 scenarios that we tested (7 of the 9 scenarios in the paper). The strict 500 word limit by PNAS precluded us from writing about design concerns we had, especially with the remaining 2 scenarios. Here we discuss the stats and design issues.

The PNAS paper has several strengths that are worth remarking on: across a large number of individual studies, spanning 9 domains, using traditional participant populations and also healthcare providers, the authors investigated a topic that is of general importance,  posting code, data, and materials (making our letter and this post possible).  Moreover the issues we raise here also concerned the authors at least to some extent, but after considering those same issues, we end up with a different interpretation of their findings.

The Statistical Issue: Comparing Means to Mins
In each of the 7 studies we re-analyzed from the PNAS paper (all studies in their Table 1), three separate groups of people indicated the acceptability of Policy A  (e.g., motivate teachers with vacation days), Policy B (e.g., motivate teachers with bonuses), or an experiment randomly assigning A or B.  In the PNAS paper, the average acceptability of the experiment was lower than of either policy. This was interpreted as evidence of experiment aversion, but actually, it can easily arise in its absence.

To illustrate, imagine an experiment giving people a dessert with either dairy (A) or peanuts (B). If 30% of people are lactose intolerant and another 30% have peanut allergies, A and B are each objectionable to 30% of people. However, the experiment is objectionable to 60% of them. This is not because of an aversion to experimentation. Rather, some object to A, while others object to B. 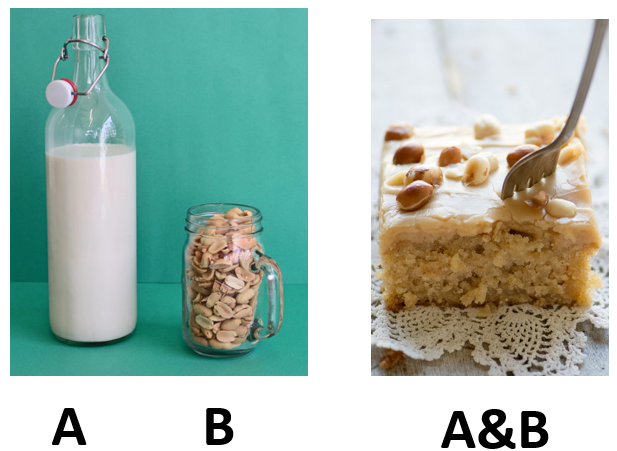 This is why in our paper (.htm) policies A and B were evaluated by the same people, and we compared the least acceptable policy for each participant to the acceptability of the experiment. In the desserts example, we would compare the share of people objecting to the experiment, to the 60% objecting to either A or B.

Fixing the statistical issue
In the PNAS studies, each participant rated only one policy, thus we cannot determine each participant’s worst policy. We approximated this necessary analysis by pairing observations from the A and B conditions, using the posted data (.xlsx). We analyzed each resulting pair as if coming from one participant, computing the worst policy for each pair, and then averaging across participants. Because two evaluations made by the same person are not independent, we didn’t form pairs drawing observations independently from A and B. Instead, we collected new data (.xlsx), estimated the within-person correlation to be r=.33, and used that number to calibrate our analyses of the PNAS data (see footnote for details [1] ).

We found that experiments were not actually rated below the average worst arm for each participant: overall M=3.48 and M=3.44 respectively. 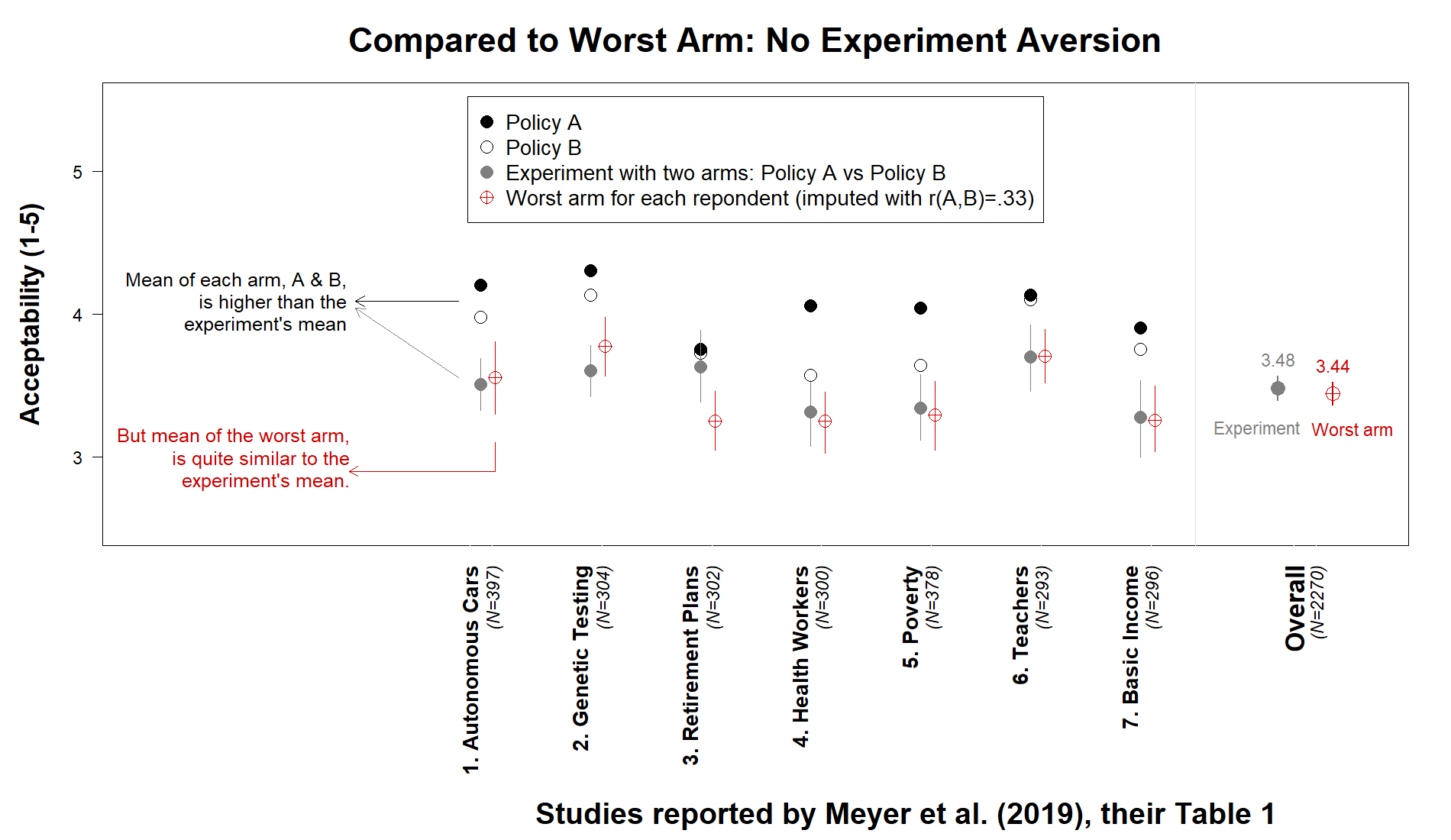 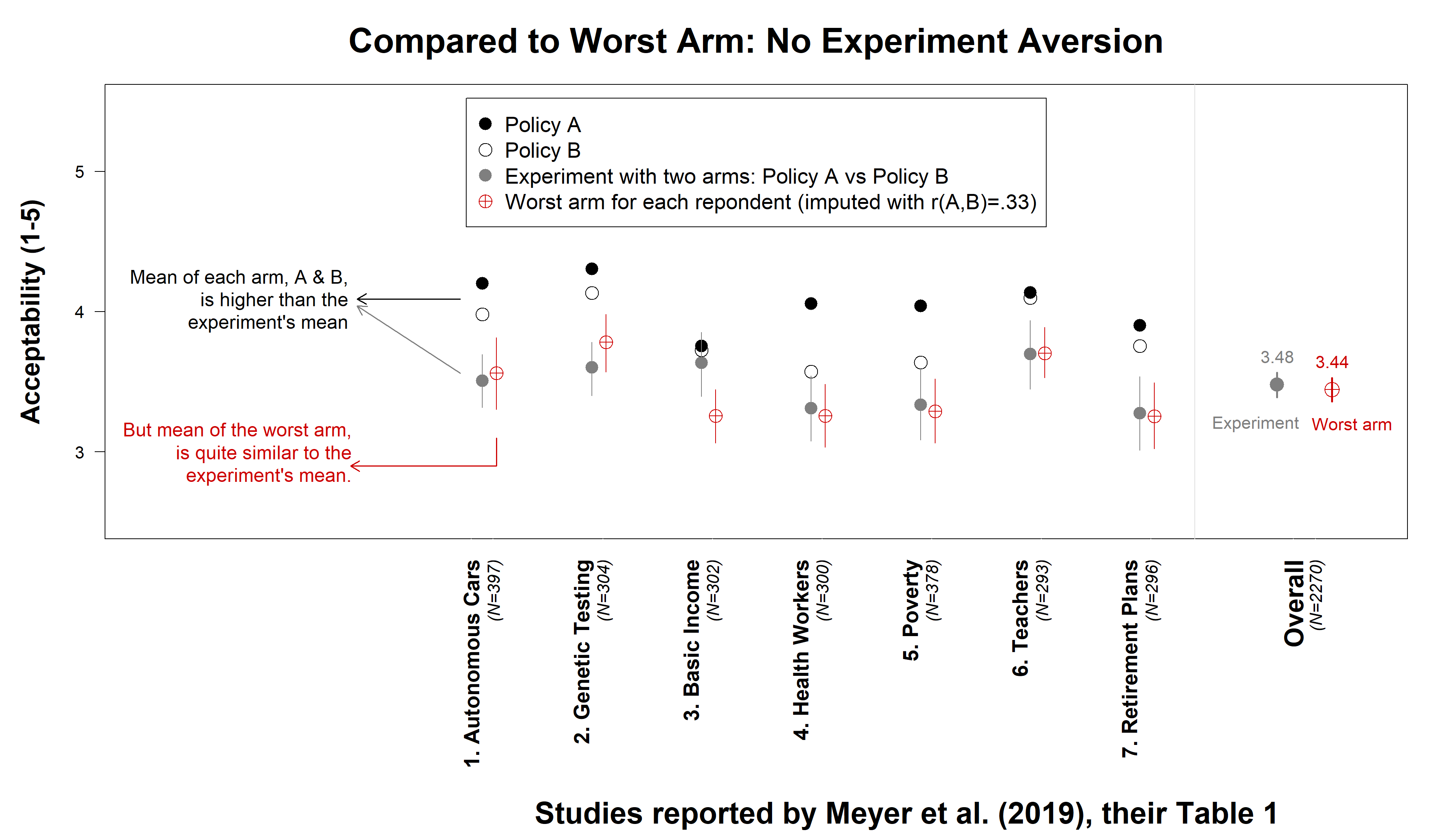 Next, the discussion that did not fit in the PNAS letter: the concerns we had with the designs of the 2 scenarios we did not statistically re-analyze. Some of these concerns apply to the previous 7 scenarios as well.

Scenario 8th of 9: Hospital director forgoes life-saving intervention
In the PNAS paper, Studies 1, 2 and 6a involved this scenario

In this study, the A/B condition is -in our view- confounded because it not only introduces experimentation, but also describes a situation where a doctor forgoes a potentially life-changing action for no disclosed reason. This is not the case in the A and B conditions, where there is only one option available. Only in A/B, therefore, could the director’s decision cause deaths, and causing deaths for a trivial benefit (e.g., saving cost associated with printing posters) is objectionable. We believe a slightly modified study could have avoided such confound. For example, in the A and B conditions, the director could also identify both A and B as potential interventions and also only implement one of them for no disclosed reason.

Unnecessary deaths aside, is it a problem that only in the A/B condition people know that the two alternative policies are available? We share our view in this long footnote. In short: we don't think so. [3].

Scenario 9th  of 9: Doctor Jones randomizes treatment to his patients
In the PNAS paper, Studies 4, 5 and 6b involved two very similar scenarios where multiple drugs for blood pressure are available and then:

While all participants are told that Dr. Jones has multiple options available, only in A/B is Dr. Jones:

Author feedback
Our policy (.htm) is to share drafts of blog posts that discuss someone else's work with them to solicit suggestions for things we should change prior to posting. We shared a draft with the authors of the PNAS paper. They caught a mislabeled item in the figure, and suggested a few word changes to increase accuracy in the description of their stimuli. Most importantly, they object to characterizing their analyses as having a problem and to characterizing our re-analysis as fixing that problem. They prefer the following characterization, that we ”conducted an additional empirical exercise that produced data that was then combined with some of their previously collected data to generate a different conclusion.” They approved that we include this quoted text.