An impressive team of researchers is engaging in an impressive task: Replicate 21 social science experiments published in Nature and Science in 2010-2015 (.htm).

The task requires making many difficult decisions, including what sample sizes to use. The authors' current plan is a simple rule: Set n for the replication so that it would have 90% power to detect an effect that’s 75% as large as the original effect size estimate.  If “it fails” (p>.05), try again powering for an effect 50% as big as original.

In this post I examine the statistical properties of this “90-75-50” heuristic, concluding it is probably not the best solution available. It is noisy and wasteful [1].

As a calibration let's contrast 90-75-50 with the “Small-Telescopes" approach (.htm), which requires replications to have 2.5 times the original sample size to ensure 80% power to accept the null. Zero noise.

The figure below illustrates. It considers an original study that was powered at 50% with a sample size of 50 per cell. What sample size will that original study recommend for the first replication (powered 90% for 75% of observed effect)? The answer is a wide distribution of sample sizes reflecting the wide distribution of effect size estimates the original could result in [2]. Again, this is the recommendation for replicating the exact same study, with the same true effect and same underlying power; the variance you see for the replication recommendation purely reflects sampling error in the original study (R Code). 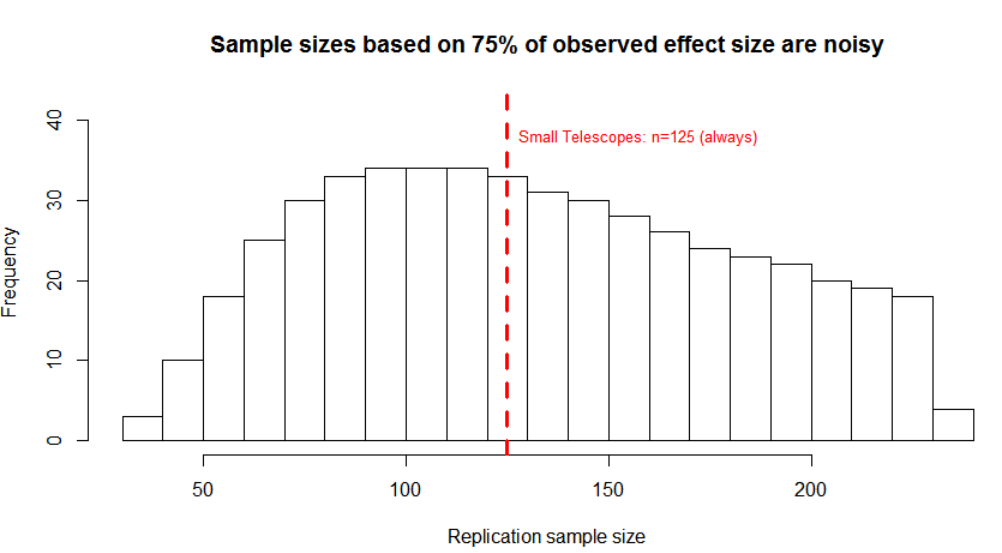 We can think of this figure as the roulette wheel being used to set the replication's sample size.

The average sample size recommendations of both procedures are similar: n=125 for the Small Telescopes approach vs. n=133 for 90-75-50. But the heuristic has lots of noise: the standard deviation of its recommendations is 50 observations, more than 1/3 of its average recommendation of 133 [3].

Waste
The 90-75-50 heuristic throws good money after bad, escalating commitment to studies that have already accepted the null.  Consider an original study that is false-positive with n=20. Given the distribution of (p<.05) possible original effect-size estimates, 90-75-50 will on average recommends n=67 per-cell for the first replication, and when that one fails (which it will with 97.5% chance because the original is false-positive), it will run a second replication now with n=150 participants per-cell  (R Code).

From the "Small Telescopes" paper (.htm) we know that if 2.5 times the original (n=20) were run in the first replication, n=50,  we already would have an 80% chance to accept the null. So in the vast majority of cases, when replicating it with n=67, we will already have accepted the null; why throw another n=150 at it? That dramatic explosion of sample size for false-positive original findings is about the same for any original n, such that:

False-positive original findings lead to replications with about 12 times as many subjects per-cell when relying on 90-75-50. 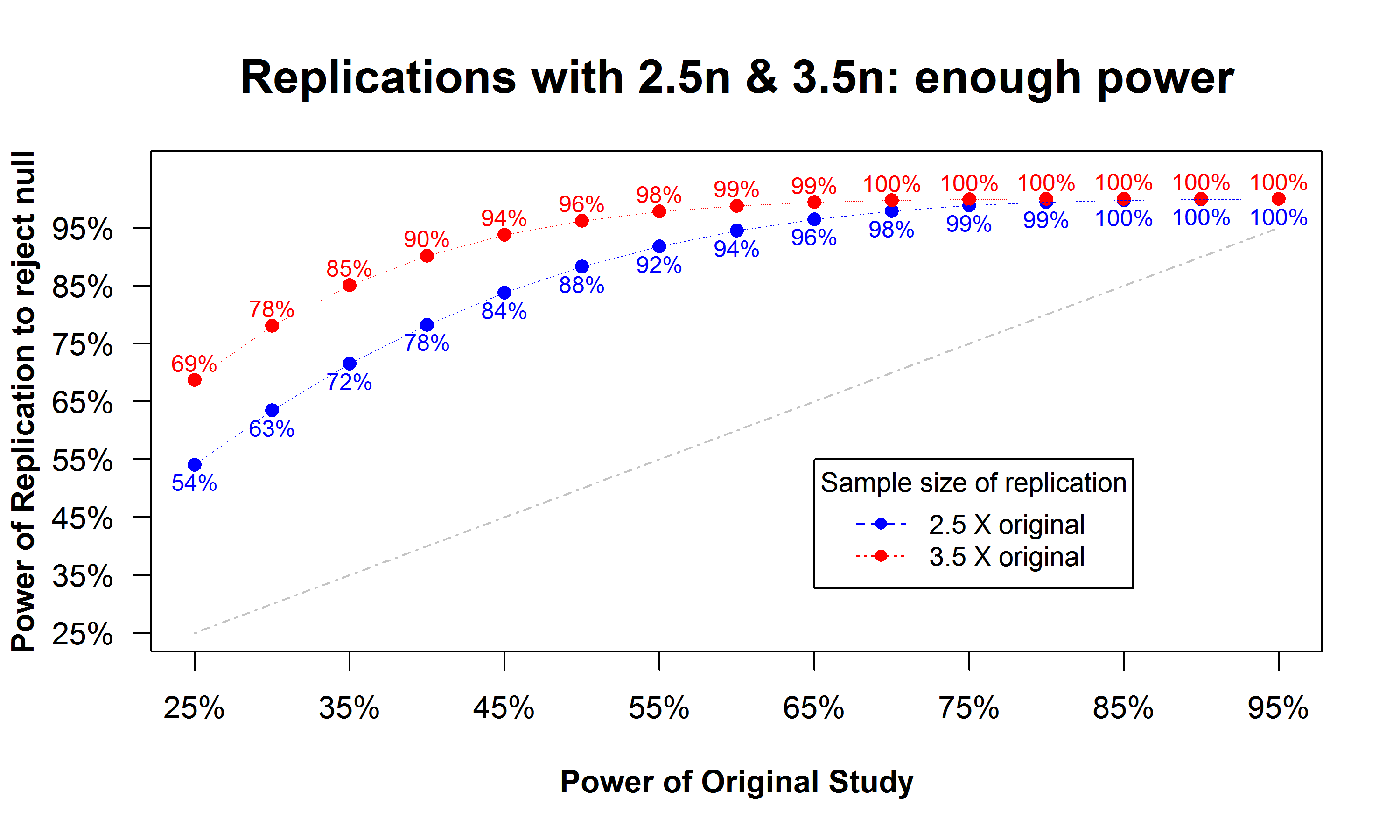 Better solution.
Given the purpose (and budget) of this replication effort, the Small-Telescopes recommendation could be increased to 3.5n instead of 2.5n, giving nearly 90% power to accept the null [4].

The Small Telescopes approach requires fewer participants overall than 90-75-50 does, is unaffected by statistical noise, and it paves the way to a much needed "Do we accept the null?" mindset to interpreting 'failed' replications.

Author feedback.
Our policy is to contact authors whose work we discuss, asking to suggest changes and reply within our blog if they wish. I shared a draft with several of the authors behind the Social Science Replication Project and discussed it with a few them. They helped me clarify the depiction of their sample-size selection heuristic, prompted me to drop a discussion I had involving biased power estimates for the replications, and prompted me -indirectly- to add the entire calculations and discussions involving waste that's included in the post you just read. Their response was prompt and valuable.