In this second installment of Data Replicada, we report two attempts to replicate a study in a recently published Journal of Consumer Research (JCR) article entitled, “Wine for the Table: Self-Construal, Group Size, and Choice for Self and Others” (.htm).

Imagine that you are in a monthly book club and it is your job to select books for the upcoming meetings. Further imagine that your book club members are equally divided between those who prefer fiction and those who prefer nonfiction. You personally prefer nonfiction. You could choose selfishly and select mostly nonfiction books, or you could less selfishly opt for a balanced reading list of fiction and nonfiction. In this kind of situation, when will you behave most selfishly?

In this JCR paper, the authors propose that the answer to this question depends on two variables: (1) whether people are considering their independent selves or interdependent selves, and (2) whether the size of the group is small or large. Paraphrasing from the abstract, the key finding can be summarized thusly:

In other words, independent consumers who choose on behalf of large groups tend to choose more selfishly, whereas everyone else tends to choose less selfishly.

The JCR paper contains six studies, all of which were conducted on MTurk. We chose to try to replicate Study 3 because it seemed to have the best statistical evidence, as it was supported by the smallest p-value in the paper: t(239) = 2.20, p = .03 [1]. In this study (N = 250), participants were first primed to think of their independent or interdependent selves. They then imagined being in a book club of either four or ten people, and were asked to choose which seven books the club members would have to read, on a scale ranging from zero nonfiction books (seven fiction books) to seven nonfiction books (zero fiction books). Subsequently, the researchers assessed participants’ own preferences for nonfiction vs. fiction books.

We contacted the authors to request the exact materials and the output of some of their analyses. They were extremely forthcoming and polite, quickly and thoroughly responding to all of our many follow-up questions and requests. We are extremely grateful to the authors for their help, professionalism, and patience.

While writing up the results of our replication, we realized that our survey contained a potentially important typo in a choice option that was part of the key dependent variable (described in more detail below). After discovering this mistake, we notified the original authors, and then, after much deliberation, decided to run a second replication. We report the results of both replications below.

In our first attempt, we set out to run a preregistered replication that had about three times the sample size of the original (N = 800 MTurkers). We preregistered to adhere to the original authors’ exclusion criteria, but we severely underestimated the number of participants who would meet these criteria [2]. We wound up with only 565 participants and an inconclusive result. So we decided to get an additional 800 participants and to combine the data from these two waves for analysis [3]. We therefore have two preregistrations for this replication attempt (wave 1: https://aspredicted.org/ni9xq.pdf ; wave 2: https://aspredicted.org/zi4ue.pdf). After all exclusions we wound up with a sample of 1,118 participants, about 4.5 times the sample size of the original study.

In our second attempt, we corrected the typo from the first attempt, and invited 2,000 unique MTurkers to participate. After exclusions, we wound up with 1,305 participants (https://aspredicted.org/gc74h.pdf).

In our replications, we used the same instructions, procedures, questions, and participant population as in the original study [4] [5]. You can access our Qualtrics surveys here (.qsf1, .qsf2), our materials here (.pdf), our data here (.csv), our codebook here (.xlsx), and our R code here (.R).

So, in sum, this study had three independent variables:

The dependent variable is how many non-fiction books the participants chose on behalf of the book club (ranging from 0 to 7).

Here are the original results, as well as our replication results. Keep in mind that in the graphs below, a more positive slope indicates greater selfishness. 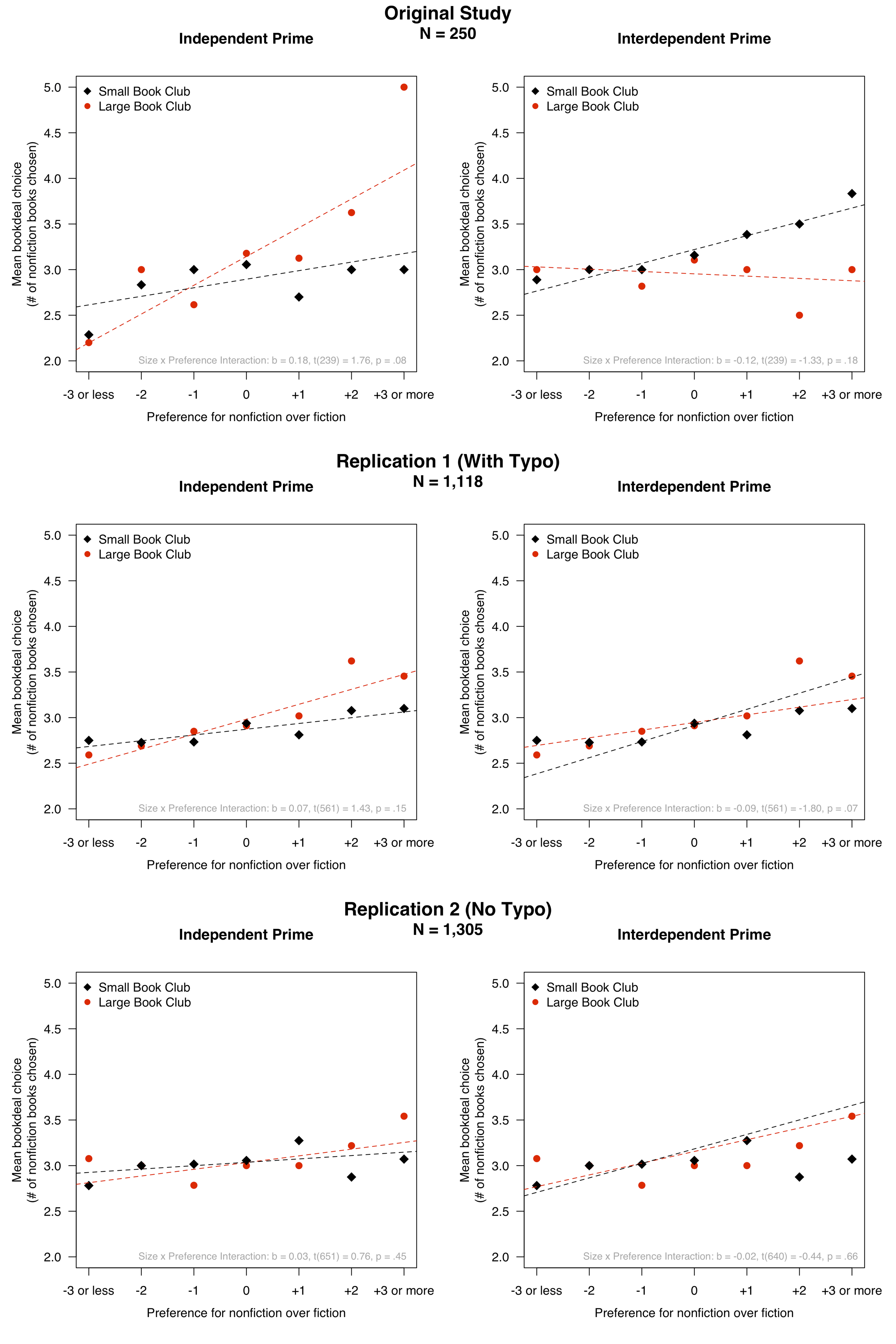 Although the 3-way interaction is in the same direction as the original, the nature of that interaction is not perfectly consistent with the original authors’ theorizing. Recall that their theory holds that the independent/large-group condition will be more selfish than the other three conditions, and that it will therefore exhibit the strongest positive relationship between book preference and book choice. But in the first replication attempt, we find that participants in the independent/large-group condition are no more selfish than those in the interdependent/small-group condition. And in the second replication attempt, we find that those in the two interdependent prime conditions are more selfish than those in the independent/large-group condition. Thus, to the extent that we are finding evidence for the authors’ three-way interaction, its form seems to be somewhat different from what was hypothesized.

Focusing again on the 3-way interaction, we can now consider what the replication results imply about the possible size of this effect, and about the sample size that would be required to detect it. 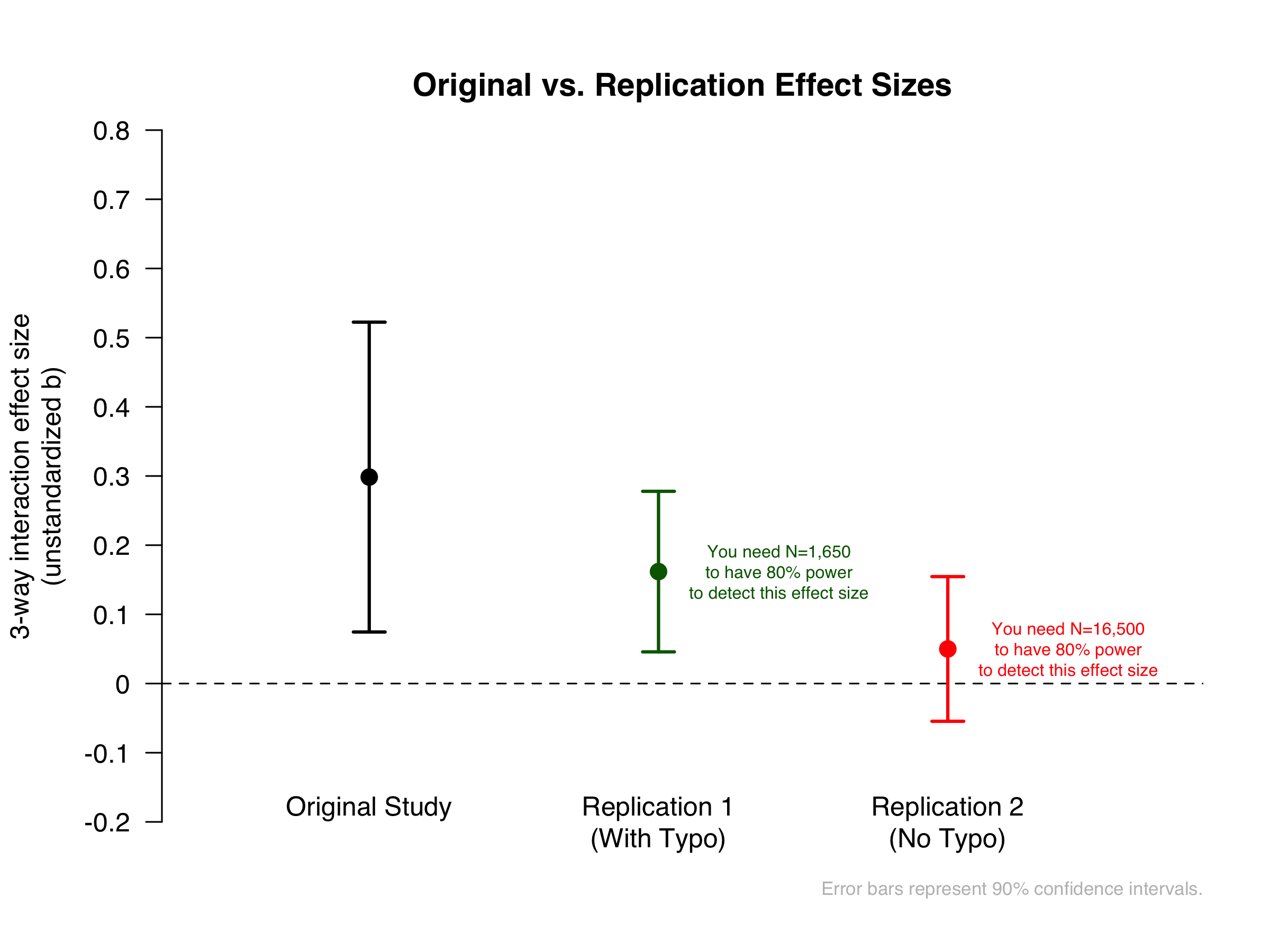 In sum, our replications suggest that (1) the author’s predicted three-way interaction may or may not be a real effect, but (2) the effect is much smaller than what was reported in the original study, (3) the effect cannot be reliably observed using the original author’s sample size, and (4) the precise shape of this interaction is inconsistent across studies and not perfectly consistent with the authors’ theorizing. At least within this specific paradigm, there is not yet compelling evidence that those who are making decisions on behalf of a group are most selfish when the group is large and when they are considering their independent selves.

"Looking over the graphs, we were encouraged to see the same basic pattern appear – at least directionally – across the original study and both replications. In the first replication, the pattern appears to be strong despite any noise that resulted from the programming error. In the second replication, the pattern is directional but weaker. We speculate that the results of this second replication may have been dampened because the study was conducted shortly before Christmas (potentially affecting the self-construal prime and/or participants' choices), or perhaps because of the necessity of delving deeply into the mTurk pool in order to acquire the desired sample sizes."Across all three studies, however, our perspective is that there is indeed an interaction between self-construal and group size that drives consumers' choices for self and others, though the size of this effect is not clear. We thank the Data Replicada team for their interest in our work, and we hope that these results will encourage future replications and research in this space, so that we may better understand the factors that drive such choices."