In the eighth installment of Data Replicada, we report our attempt to replicate a recently published Journal of Marketing Research (JMR) article entitled, “The Left-Digit Bias: When and Why Are Consumers Penny Wise and Pound Foolish?” (.htm).

In this paper, the authors offer insight into a previously documented observation known as the left-digit bias, whereby consumers tend to give greater weight to the left-most digit when comparing two prices. This means, for example, that consumers tend to treat a price difference of $4.00 vs. $2.99 as larger than $4.01 vs. $3.00 [1]. The authors’ key claim is that this bias is greater when the prices are presented side-by-side, in a way that makes them easier to compare, than sequentially, on two separate but consecutive screens.

This JMR paper contains five MTurk studies plus an additional study in which the authors analyzed scanner panel data. We chose to replicate Study 1 (N = 145) because it represented the simplest test of the authors’ hypothesis, and because its effect size was among the largest in the paper [2]. In this study, participants saw two brands of peanut butter, a premium brand and a store brand, along with their prices. The authors manipulated two factors. First, the left-digit price difference was either large ($4.00 vs. $2.99) or small ($4.01 vs. $3.00). Second, the peanut butters (and their prices) were either presented adjacently on the same screen, or one after the other on different screens. Participants evaluated the relative price of the store brand on a scale ranging from very low to very high. The researchers found that consumers showed a greater left-digit bias – evaluating the store brand to be relatively lower when it was $2.99 than when it was $3.00 – when the products and prices were presented on the same screen rather than sequentially.

We contacted the authors to request the materials needed to conduct a replication. They were extremely forthcoming, thorough, and polite. They immediately shared the original Qualtrics file that they used to conduct that study, and we used it to conduct our replication. They also promptly answered a few follow-up questions. It is also worth noting that the authors had publicly posted their data (OSF link), which allowed us to easily access key statistics and to verify that their results are reproducible (and they are). We are very grateful to them for their help, professionalism, and transparency.

In the pre-registered replications, we used the same survey as in the original study, and therefore the same instructions, procedures, images, and questions. These studies did not deviate from the original study in any discernible way, except that our consent form was necessarily different, our exclusion rules were slightly different [4], and we added an attention check to the last page of the survey to help us measure participant quality. After exclusions, we wound up with 1,099 participants in Replication 1 (~7.5 times the original sample size) and 1,555 participants in Replication 2 (~10.7 times the original sample size) [5]. You can (easily!) access all of our pre-registrations, surveys, materials, data, and code on ResearchBox (.htm).

In each study, participants saw five pairs of products alongside their prices. Each pair was presented on its own page(s) of the survey, and included a premium brand and a store brand called Great Value. The first four product pairs – ketchup, tuna, brown rice, and mayonnaise – were filler items – and the fifth pair – peanut butter – was the critical item. For each pair participants were asked: “Compared to the premium price, the price of the store brand is . . .” (1 = Very Low; 7 = Very High).

There were two manipulations. 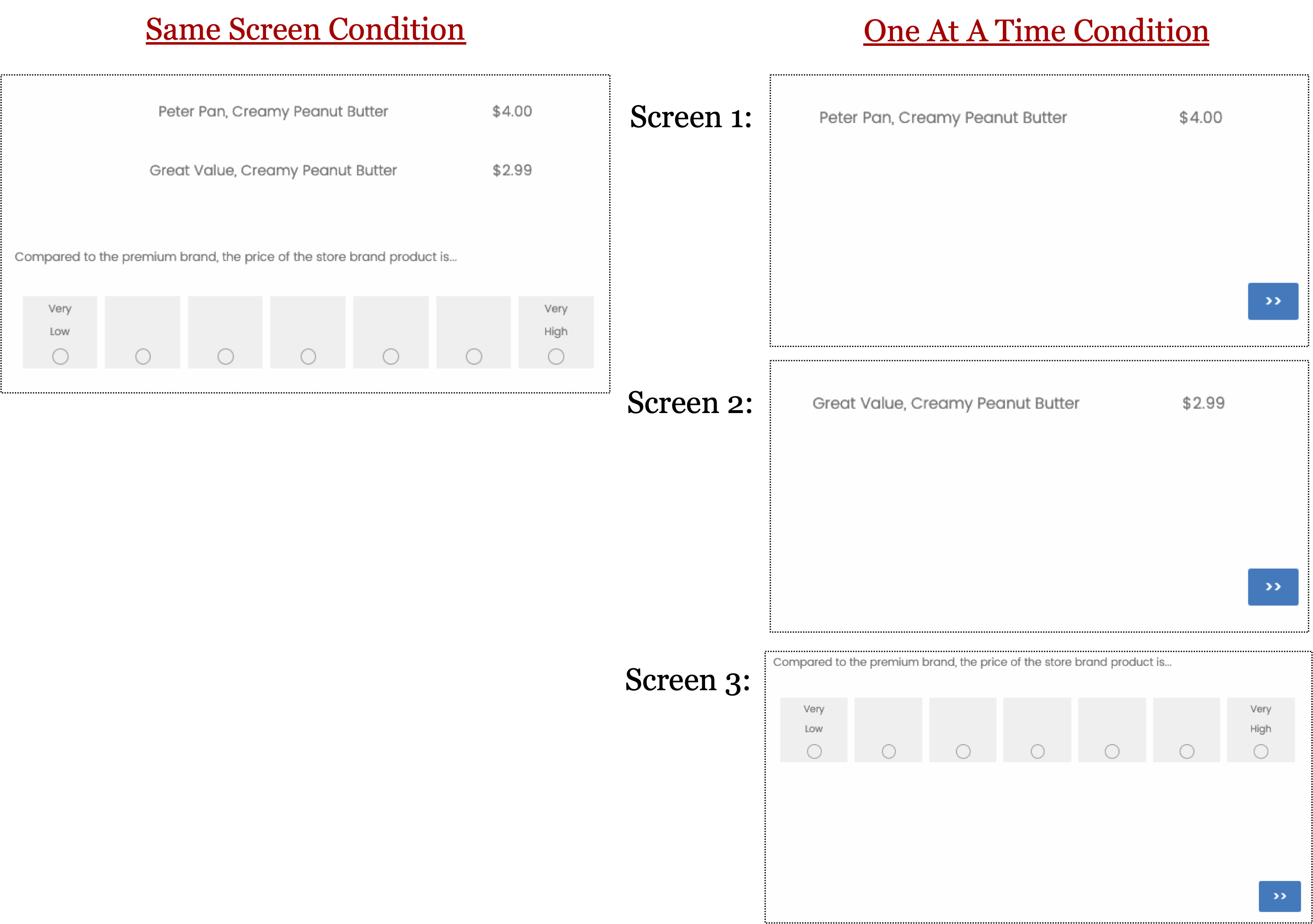 Here are the original vs. replication results. Note that there is a left-digit bias whenever a green bar is higher than the adjacent blue bar: 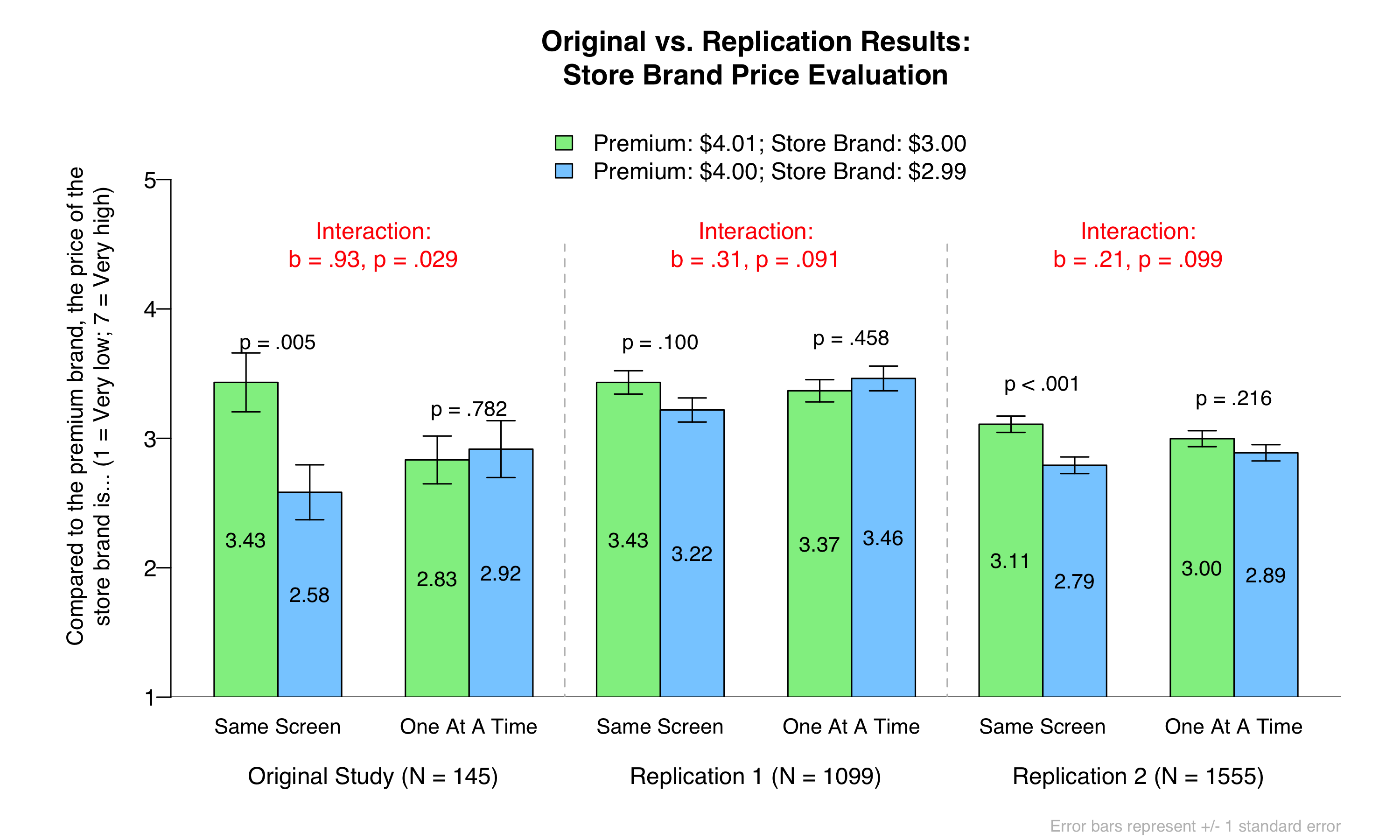 Here are the big takeaways.

First, you can see that we find marginally significant support for the authors’ key interaction in both replications. The left-digit bias is directionally larger when the prices are presented on the same screen than when the prices are presented in different screens. Although the evidence is much weaker than in the original study, we are inclined to believe that the original effect is real.

Third, using CloudResearch Approved Participants (in Replication 2) seemed to strengthen the left-digit bias in the Same Screen condition, perhaps because these participants are more attentive (for evidence see this footnote: [8]). But it did not increase the size of the authors’ interaction effect. Because of this, we think it is unlikely that our smaller effect size is driven by our somehow recruiting lower quality MTurkers.

In sum, we think the totality of the evidence suggests that the left-digit bias is larger when the products/prices are presented on the same screen than when they are presented sequentially. At the same time, our evidence suggests that the effect is much smaller than the original authors reported, and that thousands of participants may be required to reliably produce it.