Naming things is fun. Not sure why, but it is. I have collaborated in the naming of people, cats, papers, a blog, its posts, and in coining the term "p-hacking." All were fun to do. So I thought I would write a Colada on titles.

To add color I collected some data. At the end what I wrote was quite boring, so I killed it, but the facts seemed worth sharing. Here they go, in mostly non-contextualized prose.

Cliché titles
I dislike titles with (unmodified) idioms. The figure below shows how frequent some of them are in the web-of-science archive.

Colonization
A colleague once shared his disapproval of the increase in the use of colons in titles. With this post as an excuse, I used Mozenda to scrape ~30,000 psychology paper titles published across 19 journals over 40 years, and computed the fraction including a colon. “Colleague was Wrong: Title Colonization Has Been Stable at about 63% Since the 1970s.” [1]

That factoid took a couple of hours to generate. Data in hand I figured I should answer more questions. Any sense of coherence in this piece disappears with the next pixel.

Have titles gotten longer over time? 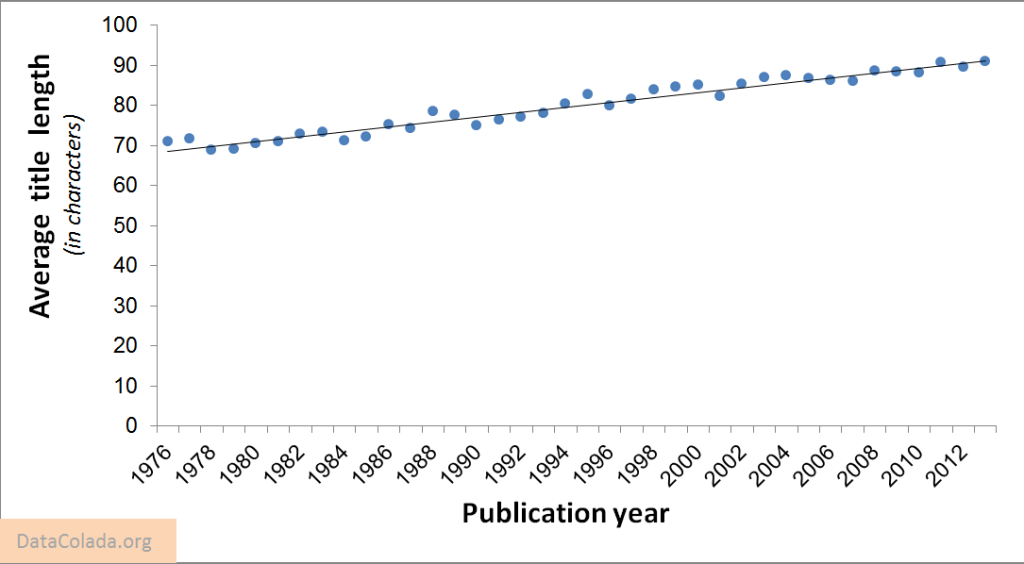 Yes. At about 1.5 characters per year (or a tweet a century).
note: controlling for journal fixed effects.

Three less obvious questions to ask
Question 1. What are the two highest scoring Scrabble words used in a Psychology title?

Hypnotizability (37 points), is used in several articles it turns out. [2] Ventriloquized (36 points) only in this paper.

Question 2. What is the most frequent last-word in a Psychology paper title?
(try guessing before reading the next line)

Alright, that's not totally fair, in psychology sex often refers to gender rather than the activity. Moreover, thinking (172) is, as expected for academic papers, more common than doing (44).
But memory blows sex, thinking, and doing combined out of the water with 2008 instances; one in 15 psychology titles has the word memory in them.