In this installment of Data Replicada, we report on Study 3 of a recently published Journal of Consumer Research article entitled, “Does Curiosity Tempt Indulgence?” (.htm). In that study, participants were induced to feel curious or not and then were asked to (hypothetically) choose between two gym memberships, one for a “normal” gym and one for an “indulgent” gym (on a 9-point scale). The authors reported that those induced to feel curious were more likely to choose the indulgent gym.

On its own, this result seems in keeping with many others. Many articles report evidence for these kinds of spillover effects, whereby a feeling induced by one task is purported to influence some unrelated task. But we were surprised by the magnitude and significance of the effect:

In our experience, spillover effects are not this big, and only rarely are they this significant, particularly with a modest sample size of about 200 people. So we were interested in trying to replicate it.

When we reached out to the authors for their materials, we learned that the second author had run this study by himself. After a bit of back and forth, he was able to send us the original Qualtrics file used to run the study. He also provided us with other information that we needed to run a replication. We are very appreciative of that.

A possible explanation for the large effect emerged in the specifics of the Qualtrics file. It appeared that there might be a consequential confound. Our reading of the original article led us to the erroneous belief that the induction task and the gym-choice task were presented as separate, unrelated tasks within the survey [1]. In truth, though, not only were the tasks not presented as separate, but rather participants were reminded of the previous emotion induction, and specifically asked to make a decision consistent with it. In the Curiosity condition, this instruction read:

In the Control condition, it read:

So, relative to the Control condition, participants in the Curiosity condition were told to put themselves in a state of mind to “acquire new knowledge or experiences” and to express that state in the subsequent decision. That subsequent decision presented participants with a choice between a familiar gym and an "indulgent" gym that was unusual in a number of ways (e.g., it included a “negative-edge pool” and a “Scandinavian wood sauna”). We were concerned that the combination of instructions and stimuli could offer an alternative explanation: people in the curiosity condition weren’t choosing the indulgent gym because of the spillover effects from momentarily induced curiosity, but rather because they were told that they should make a choice consistent with wanting to try new experiences.

But of course, the only way to know whether the hidden confound was responsible for the published result was to test it. And so that’s what we did.

In this preregistered study (https://aspredicted.org/mz4h8.pdf), we used the same survey as in the original study, with two additional conditions that we added to identify the possible operation of an instructional confound [2]. You can access our Qualtrics survey here (.qsf), our materials here (.pdf), our data here (.csv), our codebook here (.xlsx), and our R code here (.R).

We randomly assigned 3,007 MTurkers to one of four conditions in a 2 (curiosity vs. control) x 2 (original instructions vs. confound-free instructions) between-subjects design [3]. Approximately half of the participants read instructions identical to the original, as described above. For the remaining participants we removed those instructions from the survey so as to eliminate the potential confound.

As in the original, our replication experiment began by telling participants that the study was about credit card rewards, but that they would first be asked to complete a writing task. This writing task served as the emotion induction. The task required participants to answer two questions, presented on two different screens. Here were the instructions: 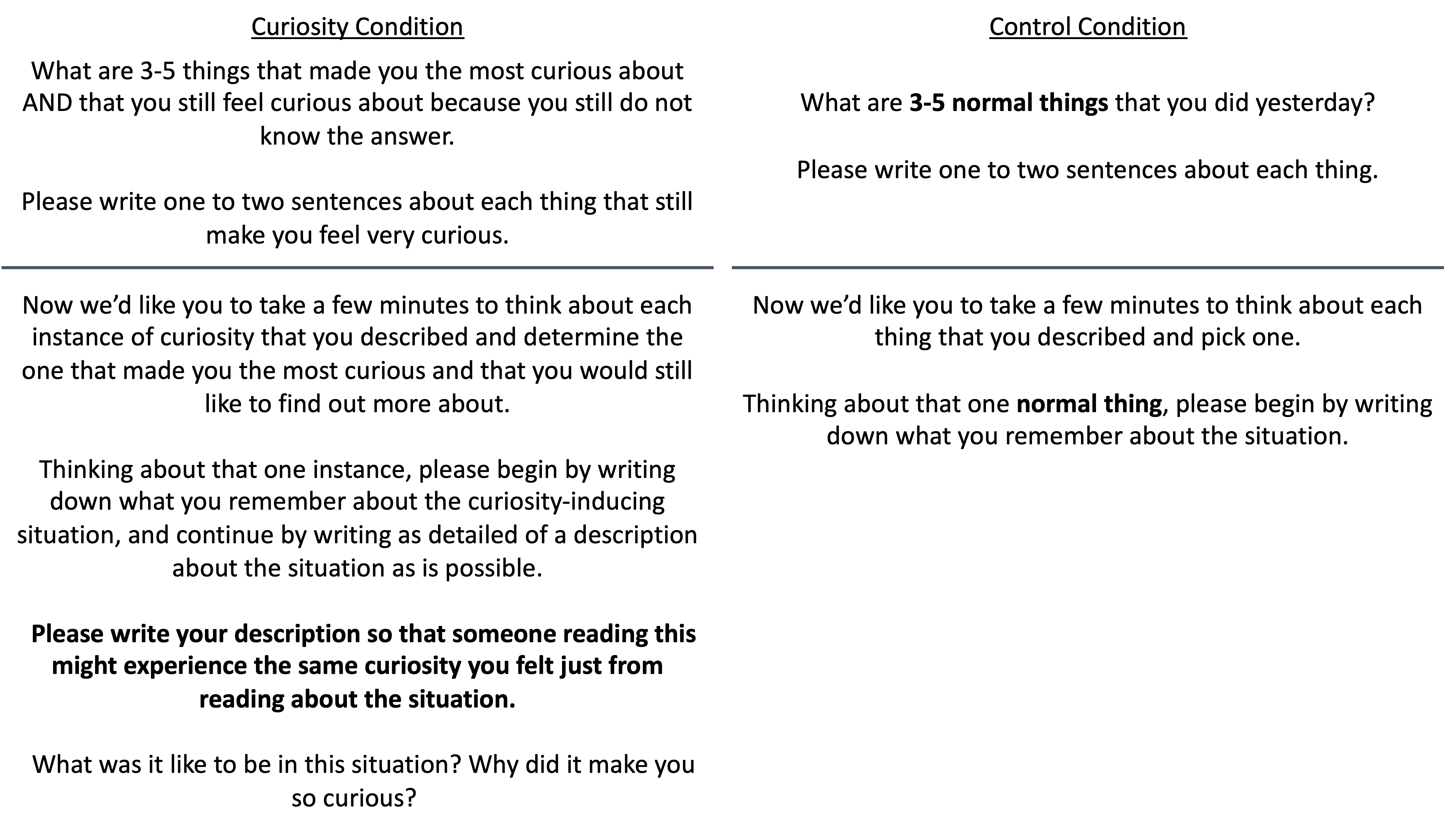 After that, participants completed the manipulation check. They then went on to imagine that their credit card was “offering you a gift card which is good for a 1-month membership at a gym in your area, valued at $50.” They were told that there were two gyms to choose from, one that is indulgent and one that is regular [4]: 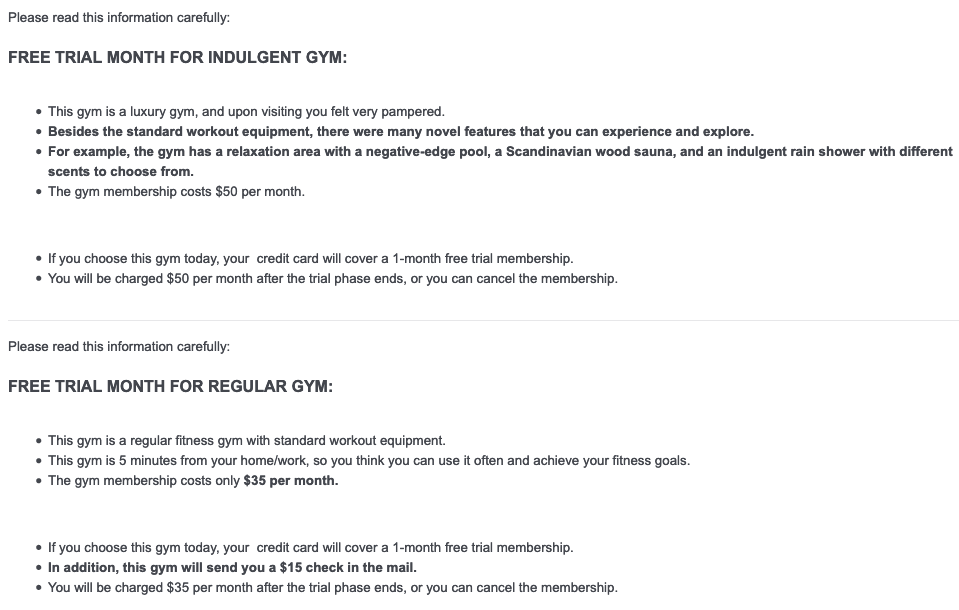 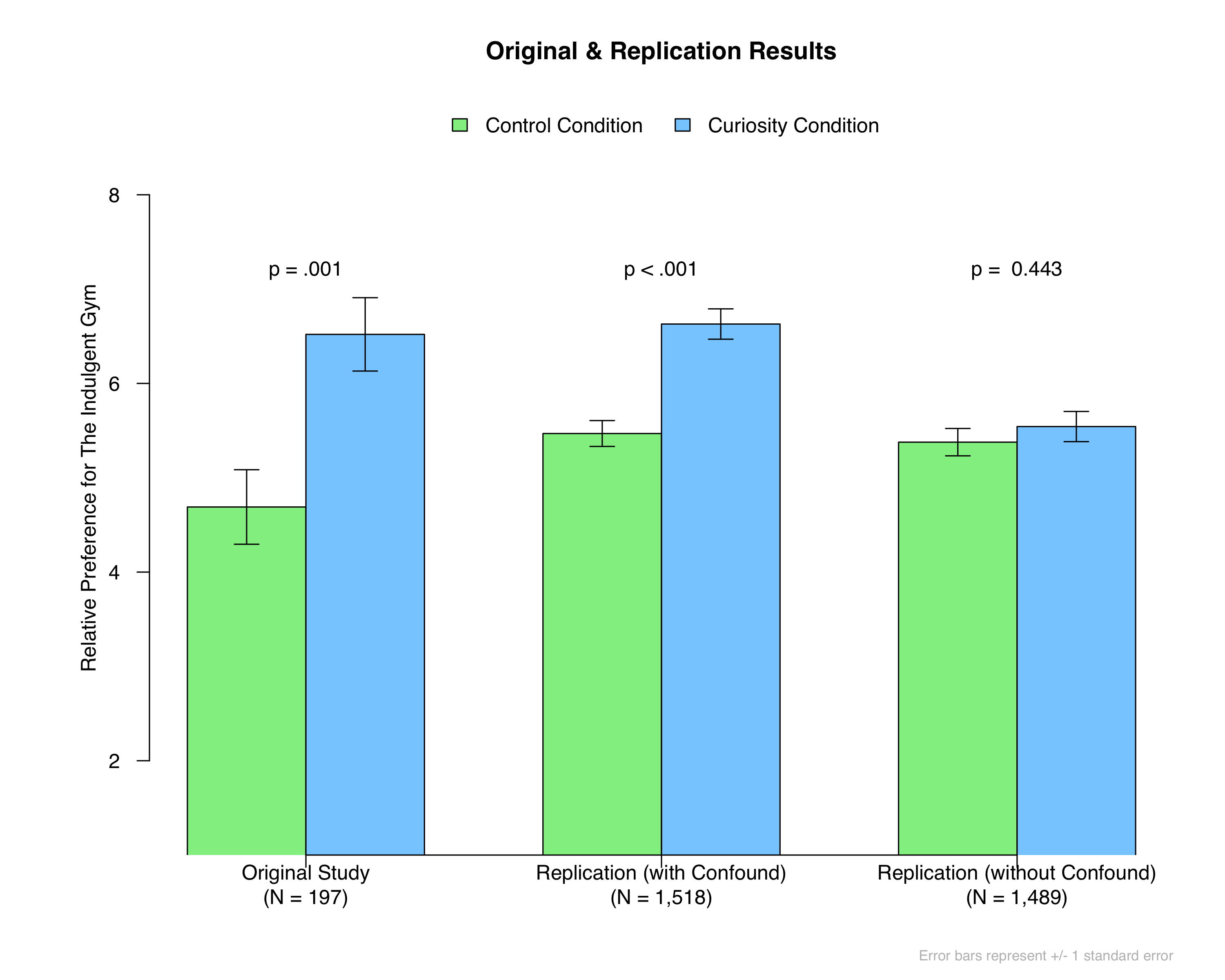 It seems that curiosity does not tempt indulgence, at least not in a way that is detectable with 750 per cell. Rather, the authors’ original result was best explained by a confound. Furthermore, it was a confound that could only be identified in the original materials, and was not observable to reviewers and readers who were merely reading the final manuscript [6].

Many contemporary methods courses teach something about open science and pre-registration, but all methods courses have always highlighted the lurking dangers of confounds. For that reason, their identification largely dominates comments in the review process and conversations in journal clubs. But those dialogues are only possible when the confounds are taken out of hiding and shared with all audiences. Ideally, every article will contain enough detail to differentiate confounded and unconfounded designs, but even if they are not, the posting of original materials (and data) will necessarily help. We hope that all journals, including the Journal of Consumer Research, will default to requiring authors to share their original materials. In the meantime, we recommend that reviewers ask for them to do so.

"We would like to thank you for your interest in our work and for examining it further.We had made the requested materials and instructions available to you, based on which you conducted a replication. As summarized in your blog post, you found significant replication using our original design which featured an emotional-state reminder. Using your proposed method and design which excluded an emotional state reminder, such replication did not materialize. We find your results intriguing and hope to use these insights to inform future theorizing and empirical probes of curiosity specifically and emotion induction generally. Many thanks again for your interest in our work."