In the third installment of Data Replicada, we report our attempt to replicate a recently published Journal of Consumer Research (JCR) article entitled, “The Uncertain Self: How Self-Concept Structure Affects Subscription Choice” (.htm).

This JCR paper contains six studies. Studies 4 and 6 were conducted on MTurk, and we chose to try to replicate Study 4, both because its results were stronger than those in Study 6, and because it tested the two key hypotheses at once: that low self-concept clarity both increases the tendency to retain and decreases the tendency to acquire an identity-relevant magazine subscription [1].

We contacted the first author to request the materials needed to conduct a replication. She was extremely forthcoming and polite, replying within 24 hours. She shared the original Qualtrics file that she used to conduct that study, and we modified it only slightly to conduct our replication [2]. We are very grateful to her for her help and professionalism.

In the preregistered replication (https://aspredicted.org/mi7km.pdf), we used the same survey as in the original study, and therefore the same instructions, procedures, images, and questions. This study did not deviate from the original study in any discernible way, except that the criteria we used to choose our MTurk sample, and the amount that we paid them to do the survey, may have been different from the original [3]. The original study reported no exclusions, and so we did not exclude any participants who completed the dependent variable. You can access our Qualtrics survey here (.qsf), our materials here (.pdf), our data here (.csv), our codebook here (.xlsx), and our R code here (.R).

After completing that “study,” participants moved on to a “Consumer Choice Study.” In the “Retention” condition, they were told that they currently have a digital subscription to People Magazine and The Economist, and that they are considering cancelling one of those subscriptions. In the “Acquisition” condition, they were told that they are searching for a new digital magazine subscription to subscribe to, and that they were considering People Magazine and The Economist. Participants then used an unnumbered sliding scale, defaulted to the scale midpoint, to indicate which magazine they would keep (in the Retention condition) or which magazine they would buy (in the Acquisition condition):

Though unnumbered on the page, the scale ranged from 0 = People Magazine to 100 = The Economist. Because a pretest showed that The Economist is more identity relevant than People Magazine, higher numbers on this scale indicate a greater desire to retain or acquire an identity-relevant subscription [4].

Before presenting the results, it is worth discussing our analysis plan. The original study presents evidence for a crossover interaction, meaning that the study contained evidence for two separate and independent hypotheses. If our replication were to find a significant interaction, that result alone would not distinguish between a successful replication of both of these effects or a successful replication of just one of them. Indeed, whenever you are replicating a crossover interaction, it is best to analyze the two results independently, since the results themselves are independent. Thus, we preregistered to separately analyze the Retention condition results and the Acquisition condition results. Of course, we could still compute the overall interaction, and we report that below as well, in a footnote. 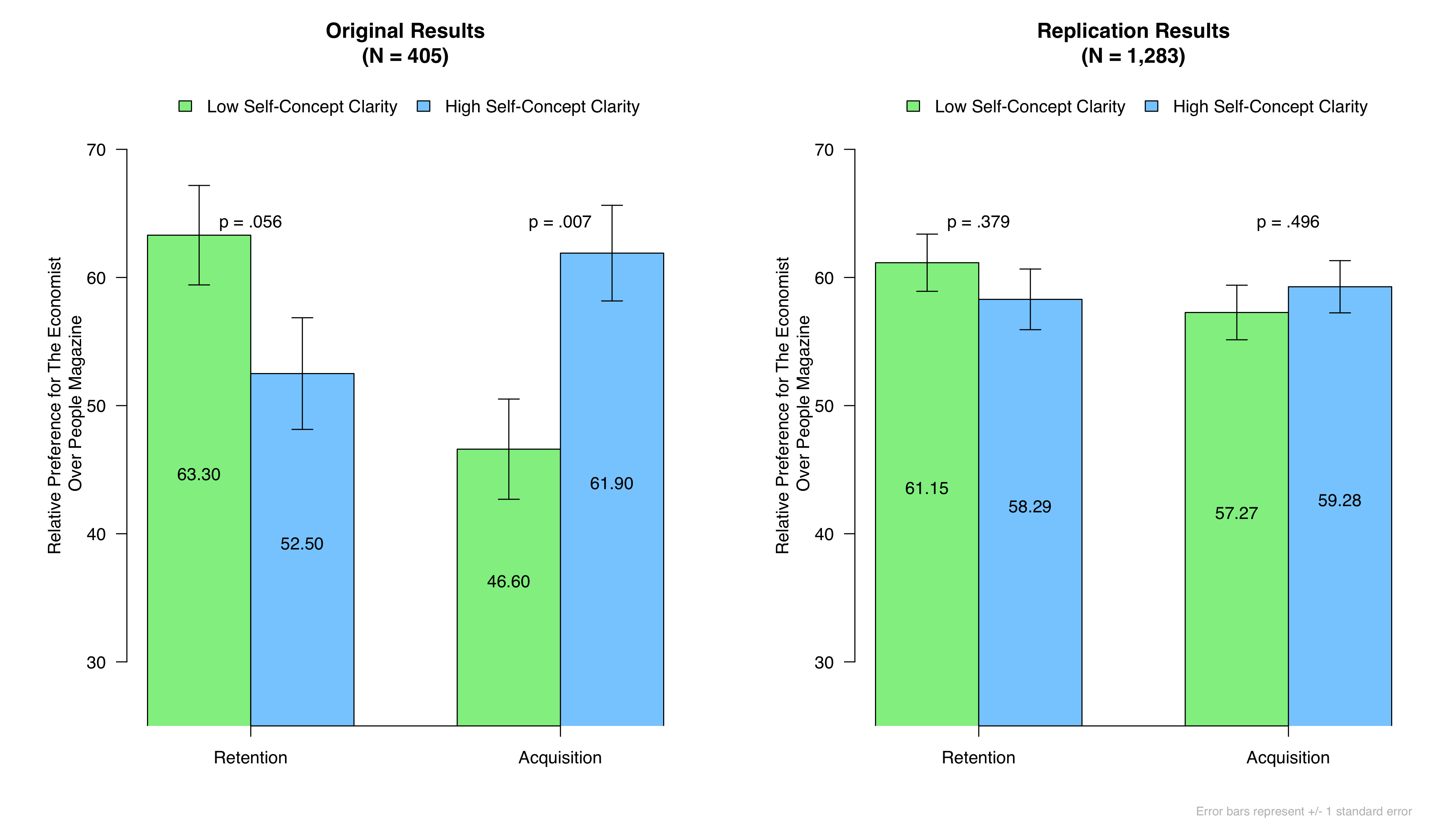 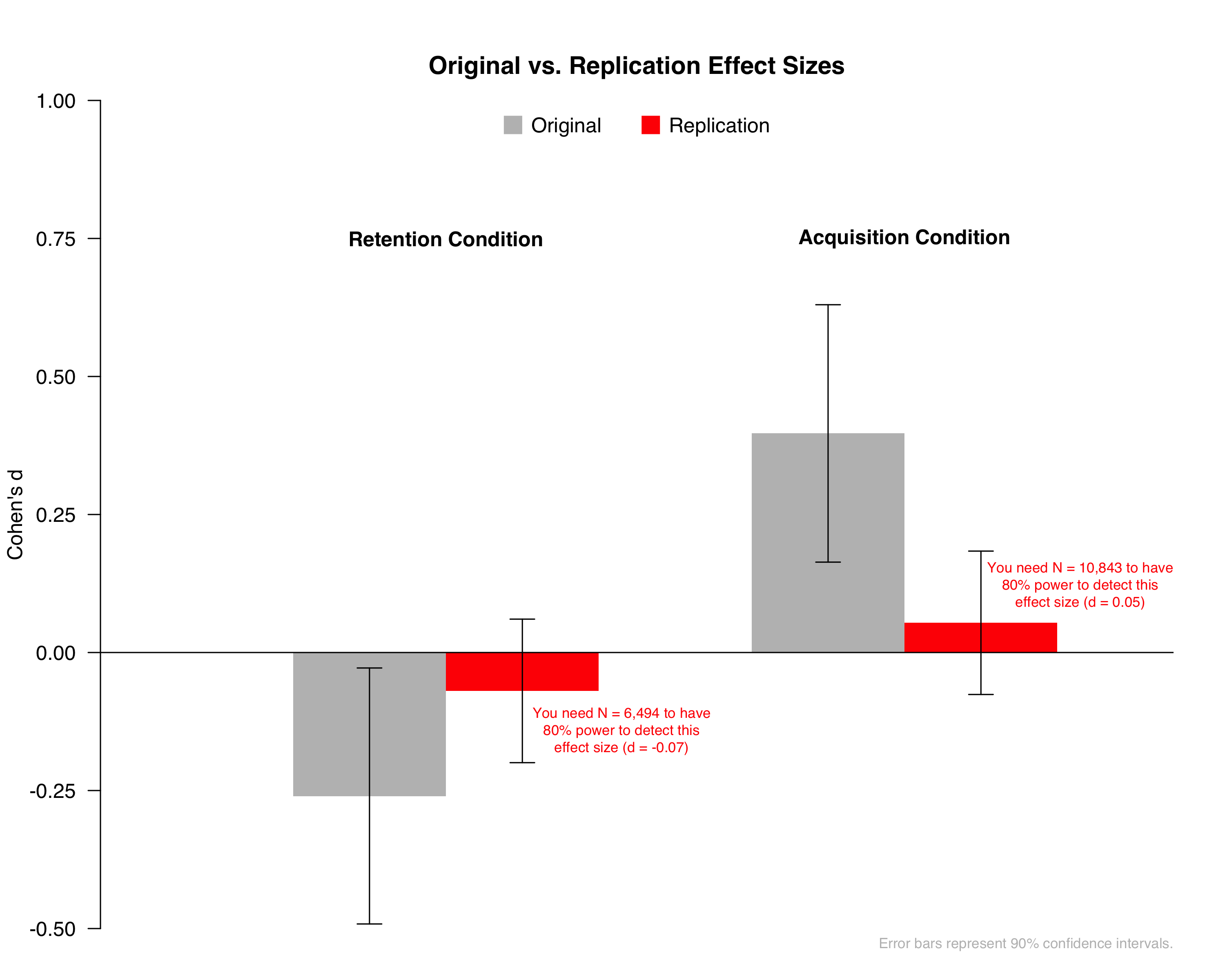 In sum, using three times the sample size as the original study, we find no evidence that people’s tendency to retain or acquire identity-relevant magazine subscriptions is affected by having them write about aspects of their lives that make them feel certain versus uncertain about themselves.

"We were encouraged to see the predicted crossover pattern in this data, although it was disappointing that the effect of the SCC manipulation is clearly not as strong as in the original data from 2017 (.csv). Overall, while we appreciate the importance of exact replications, one concern is whether strict adherence to the original methods is always the best test of an underlying theory, especially when an experiment relies on activating a mental state to test the relationship between constructs (Stroebe & Strack, 2014; .html). For example, the original study was designed to test how SCC affects subscription choices. To test the theory we asked people to complete an essay task that either increased or decreased their SCC. If this essay task was less effective in altering people’s SCC in the replication, we would expect a weaker effect on choice. We did not include a manipulation check of SCC in the original study (although we had reported one in a previous study), and so S&N also did not include it in their methods. As a result, we don’t know if the manipulation was as effective in the replication attempt. While there are many reasons that an established manipulation may not activate a mental state in a specific instance (Stroebe & Strack, 2014), one possibility relevant to the current discussion may be related to mTurk data quality.

"Anecdotal and empirical evidence suggests that mTurk data quality has declined, most noticeably since the summer of 2018 (Chmielewski & Kucker, 2019; .html), although we acknowledge that opinions differ on the impact of these issues (see Data Colada [76]). Especially when an experiment relies on a writing task to operationalize a mental state, low quality responses can dampen the impact of the manipulation and reduce effect sizes. To explore whether data quality might matter here, we followed the example of Chmielewski and Kucker (2019), and filtered out responses with low quality indicators (i.e.., nonsense responses to the prime, such as, “Testttttt,” “yes very good allyes very good” (n = 33), completion times 2SD slower than the mean (n = 37), and multiple responses from the same IP address (n = 39)). The pattern that emerged was much closer to the original 2017 finding, F(1, 1170) = 2.74, p = .098, although the simple effects, while stronger, remain non-significant. Thus it is unclear to us if the effect sizes reported in this post are the most accurate representation of the theoretical impact of SCC on subscription choice. In sum, while the current data may not find evidence of the relationship obtained in our six studies, we certainly support the effort, and agree that more research is required to fully understand how SCC affects subscription choices."