In this post I show how one can analyze the frequency with which values get repeated within a dataset – what I call “number-bunching” – to statistically identify whether the data were likely tampered with. Unlike Benford’s law (.htm), and its generalizations, this approach examines the entire number at once, not only the first or last digit.

I first thought of this approach while I was re-analyzing data from the 2019 Psych Science paper on factory workers’ use of hand sanitizer (.htm) that Frank Yu, Leif Nelson and I discussed in DataColada[74]. In that post, we showed that the data underlying that paper exhibited two classic markers of data tampering: impossibly similar means and the uneven distribution of last digits (for numbers generated on a continuous scale). The authors issued a correction (.htm), and the editor expressed his concern (.htm).

After reading a draft of this second post, the first two authors of the article requested the paper be retracted, and that process is underway.

Code to reproduce all figures and calculations in this post.

Nudging hand-sanitizing
The Psych Science paper describes three experiments run in Chinese factories, where workers were nudged to use more hand-sanitizer. In this post I focus on Studies 2 and 3, where sanitizer use was measured to a 100th of a gram (for reference: a paper clip weighs about 1 gram).  Let’s start with histograms of daily sanitizer use in the two studies: 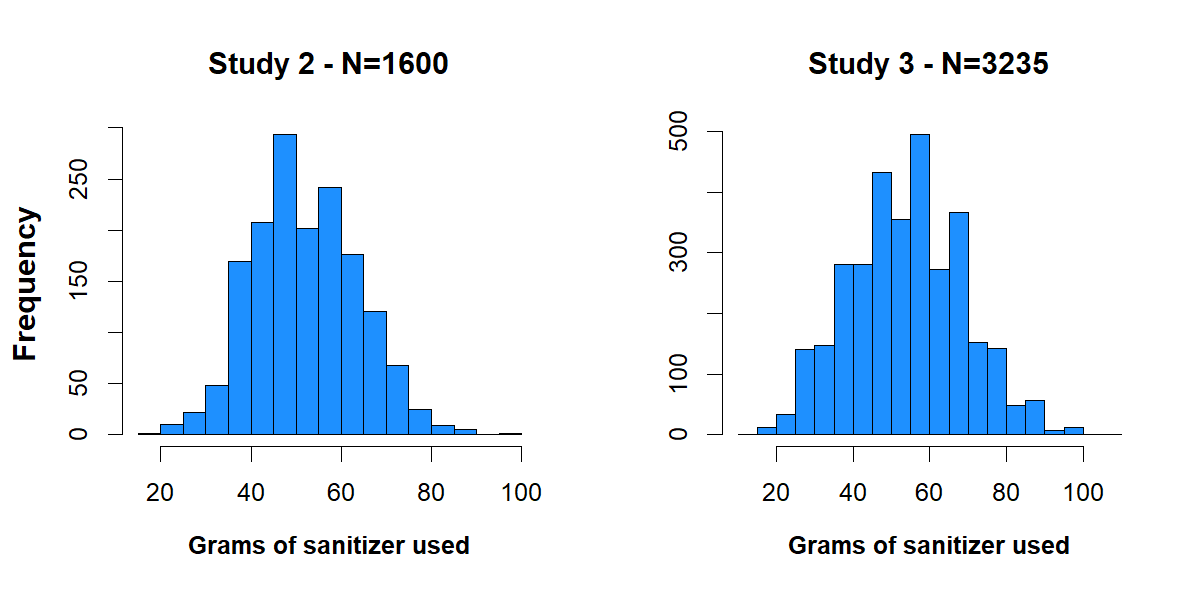 Fig 1. Grams-Histograms in Studies 2 and 3

These histograms put many observations into each bin, so we don’t observe how often individual values are repeated. Figure 2 below zooms into Study 3’s histogram, giving an entire bin to each of the 8000 possible values between 20 and 100 grams. 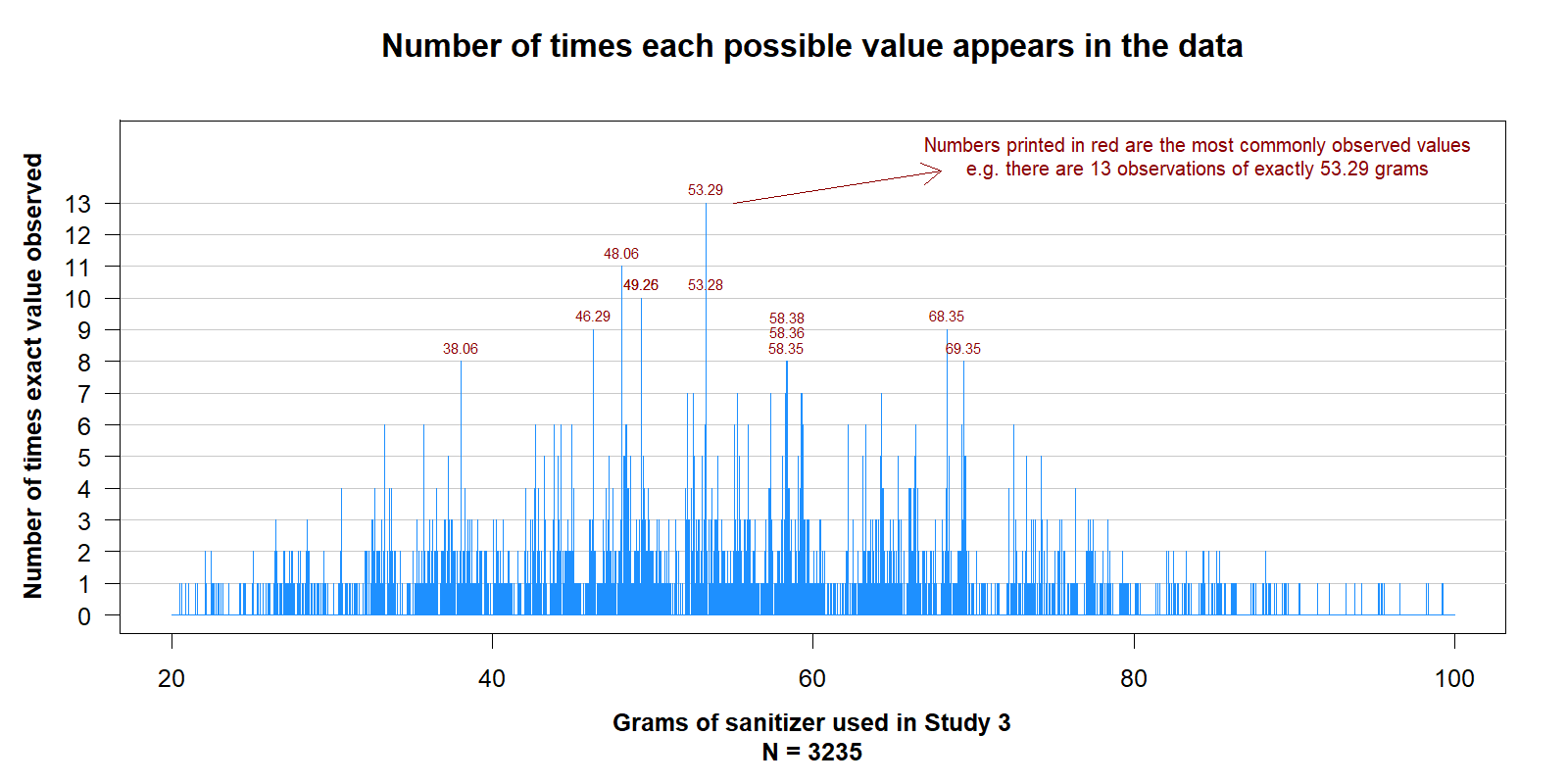 The data seem intuitively bunchy. But how objectively surprising is Figure 2?

(2) Expected-bunching
Because sanitizer use was measured to 1/100th of a gram, we can generate expected levels of number bunching by splitting gram values into an integer and decimal part, and then shuffling the decimal parts across observations. This effectively treats the decimal portion as random. This preserves the overall distribution of weights, as well as the exact frequency of every observed decimal value.  All we are assuming here is that the (recorded) weight in grams is independent of its decimal portion (any observed number of grams could be associated with any observed fraction of grams). This test is thus independent of the already shown evidence that these data fail the uniform last digit test, for the (non-uniform) frequency of last-digits is maintained in the bootstrapped samples.

This is how the shuffling works:

Fig. 3. Example of how decimals are shuffled to generate new data to compute expected level of bunching without making distributional assumptions.

I will also report analogous calculations shuffling only the last digit of observed numbers. So, for example, 52.45 could become 52.48. 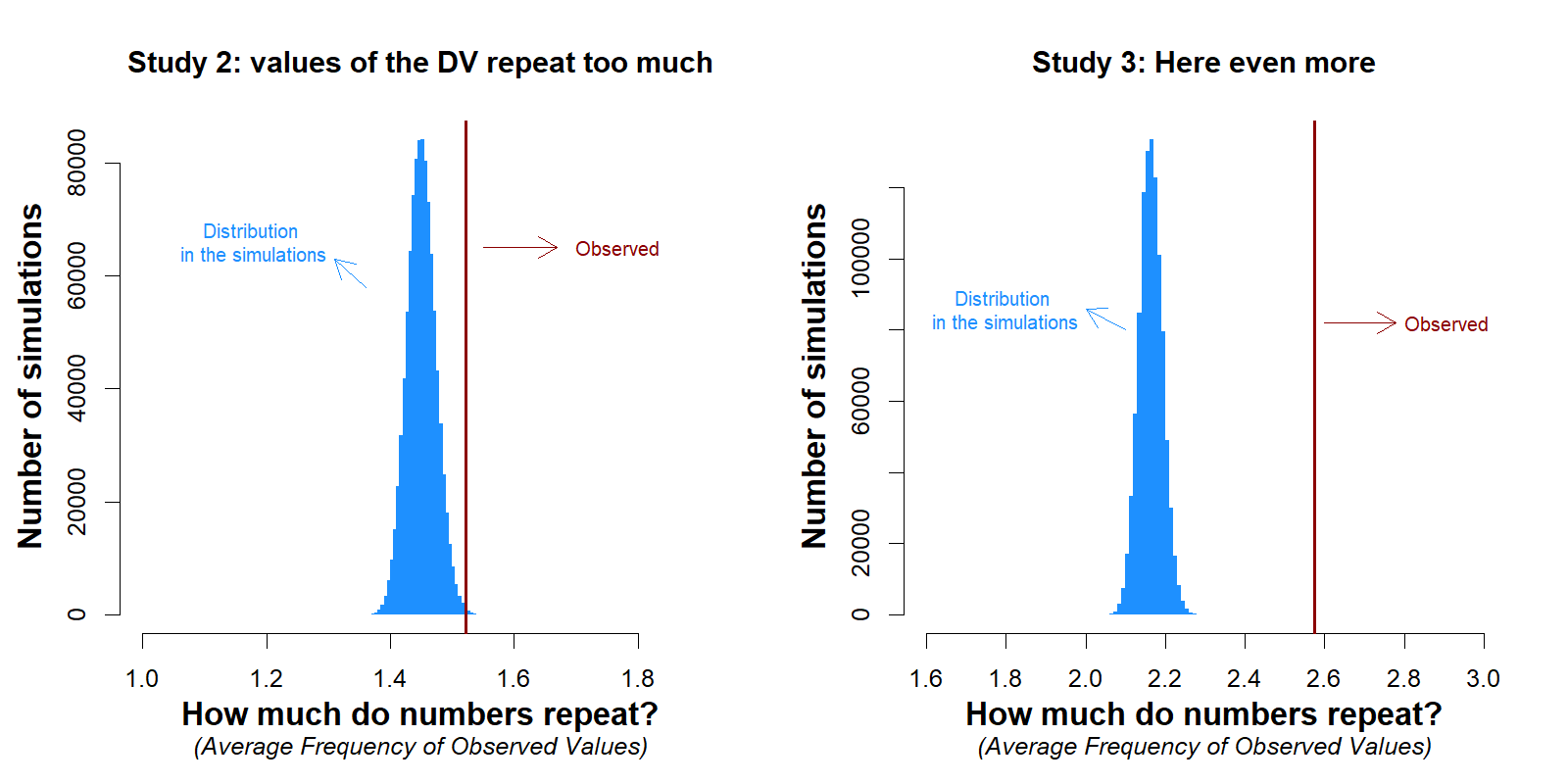 If you perform the same analysis while shuffling only the last digit, instead of the last two digits, the results are essentially the same (figure in footnote [3] ).

Placebo tests
The number-bunching analysis used above, computing average frequency and shuffling decimals, is novel. It is important to apply it to some placebo datasets, expected be free of tampering. I applied it to two placebo datasets. The first comes from a study (.htm) weighting brood carcass mass with a scale also precise to 1/100th of a gram. The second dataset consists of a montecarlo simulation, generating data from the normal distribution matching the N, mean, and SD from Study 3. In neither case did the analysis suggest that these datasets contained too many repeated observations. [4].

Fig 5. Number-bunching test does not flag placebos as suspicious

Another possibility is that not all decimal values are equally likely with all integer values. For example, the scale may tend to report higher decimal values when the overall weight is lower. This footnote explains how I rule out that explanation [6].

Correlated decimals
Evaluating the benign explanations discussed in the previous section lead me to find yet another anomaly present in these data: the frequency of decimal values is similar in Studies 2 and 3 (see Fig. 6). 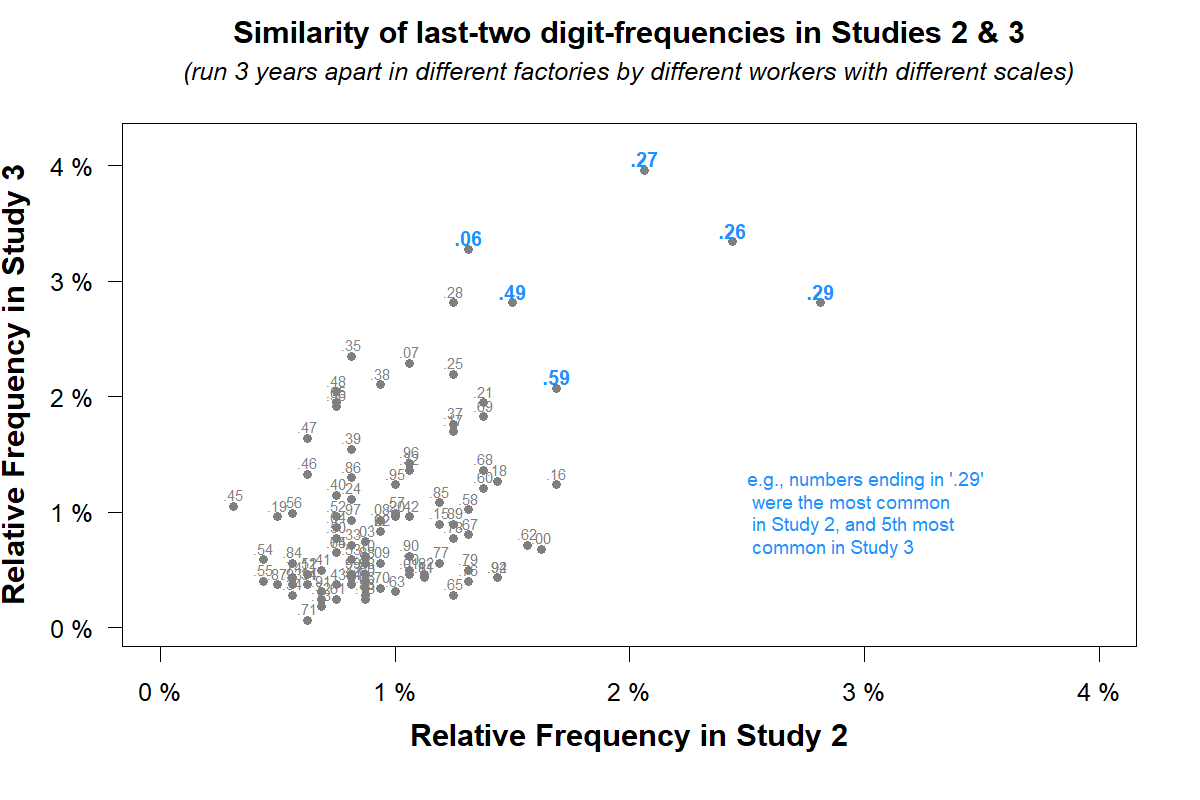 Fig 6. Same decimal values are common in both studies. That should not happen.

For example, .27 was the single most common decimal value in Study 3, and it was the third most common in Study 2.  The correlation of the frequency of decimal values across studies should be zero, but it is r = .54, p < 1/100 million. This implies a common source of ‘error’ for the anomalous number‑distributions in Studies 2 and 3.

That’s especially odd because Study 3 was run three years after Study 2, in a different factory, using a different scale, with sanitizer weighed by a different person(s).

Other uses of number-bunching anlaysis
Here I applied number-bunching analysis to a single sample (the entire study). I was able to do this because the data included an effectively random 1/100th of a gram level of precision. In general that's not the case (e.g., count data, likert scales, and willingness-to-pay data are not unnecessarily precise). In those situations we could use  number bunching analysis when a null distribution is being considered. For example, we could test whether the last-two digits are distributed uniform in these data, using number bunching rather than a chi-square or a Kolmogorov-Smirnov test. For likely consequences of data tampering, the number-bunching approach has much more power. We can also use number-bunching analysis to make comparison across conditions. For example, are the data too evenly distributed across them? I hope to write about these extensions in a future post or paper.

Author feedback
Our policy (.htm) is to share drafts of blog posts that discuss someone else’s work with them to solicit suggestions for things we should change prior to posting. I shared a draft of this post two weeks ago with the first author of the hand-sanitizer paper and the editor of the journal. They provided a few suggestions to make the writing more neutral, which I welcomed and implemented. They also consulted with statistical experts and after such consultations they decided to retract the article.