Just two steps are needed to go from computing p-values to computing Bayes factors. This post explains both steps and introduces Hyp-Chart, the missing link we arrive at if we take only the first step. Hyp-Chart is a graph that shows how well the data fit the null vs. every possible alternative hypothesis [1].

Hyp-Chart, the graph, is not new, I suspect many people have drawn it when teaching Bayes factors, but it did not seem to have a name, and it needed one for this post [2].

R Code to reproduce all figures in this post

Starting point: the p-value
To compute a p-value we ask: if the null hypothesis were true, how likely is an outcome at least as extreme as the one we observe? To compute that, we need the likelihood of every possible outcome if the null were true (dtrue=0). Figure 1, which you’ve seen a million times, depicts those likelihoods.

Unfamiliar with d as measure of effect size? See this footnote [3]. 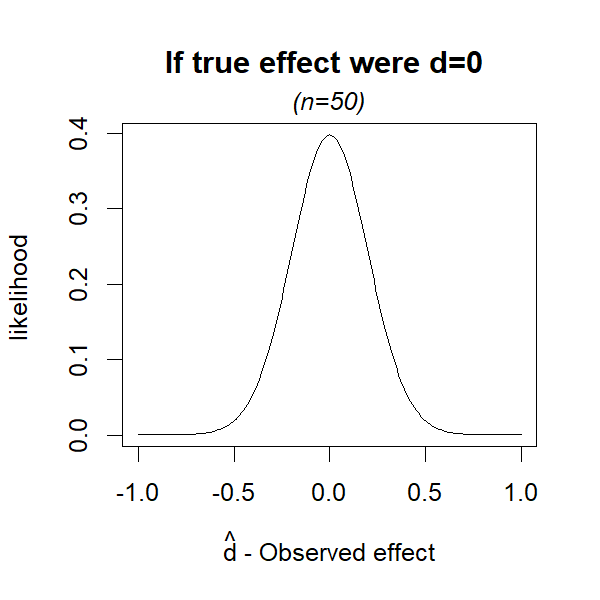 Fig 1. If null is true, dtrue=0, what’s the likelihood of each estimate?

So, say you run a study and get d̂ =.5. The likelihood of that estimate under the null of dtrue=0, is found in that distribution. Specifically, it’s represented by the small vertical red line in Figure 2. 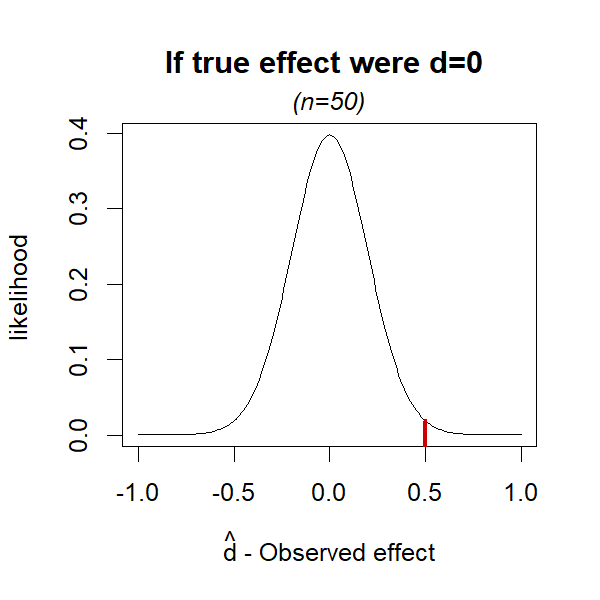 The p-value is the probability of getting an effect at least as extreme, so the area to the right of that red line (for a one-sided test). But for this post we will just focus on the red line itself. With this review behind us, let’s now get to the two steps required to get a Bayes factor instead of a p-value. 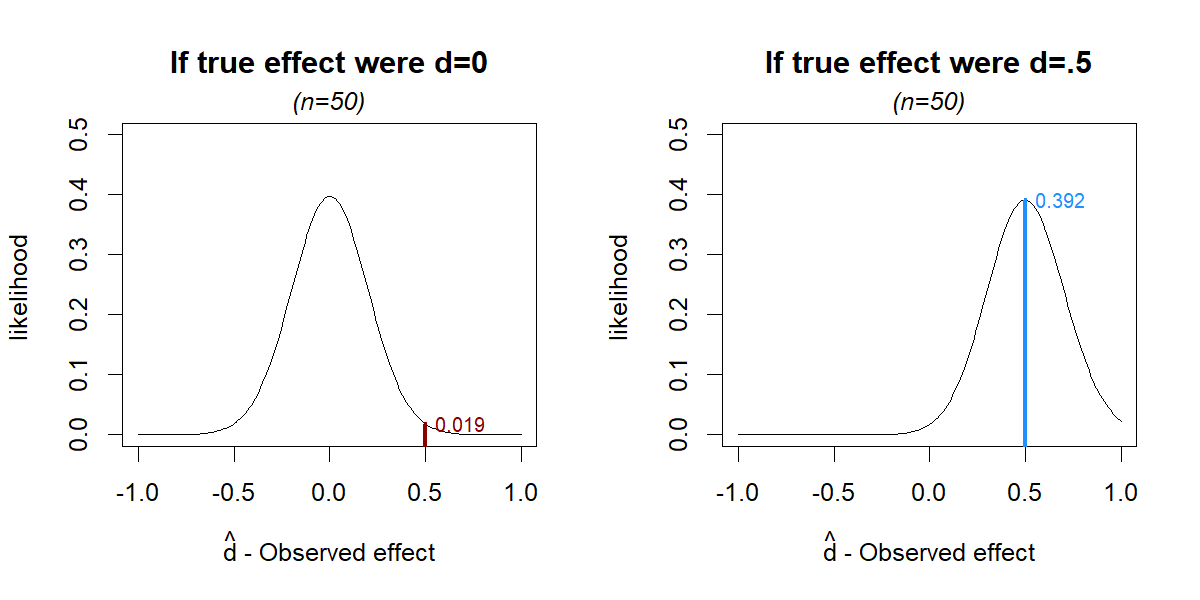 We can quantify how much more likely d̂=.5 is under the alternative, by dividing the long vertical line in Figure 3, by the short vertical line.  We get 0.392/0.019=21. That number, 21, is called the “likelihood ratio”, because it is a ratio, of likelihoods: it tells you that d̂=.5 is 21 times more likely if dtrue=.5 than if dtrue=0 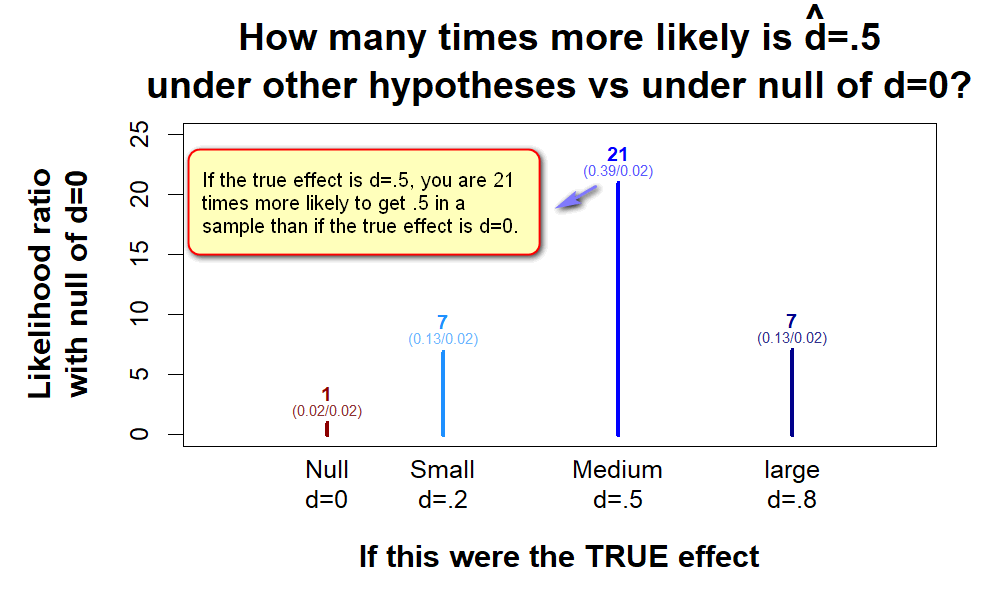 We can do this for every possible hypothesis in a graph that I will (affectionately) refer to as ‘Hyp-Chart’. 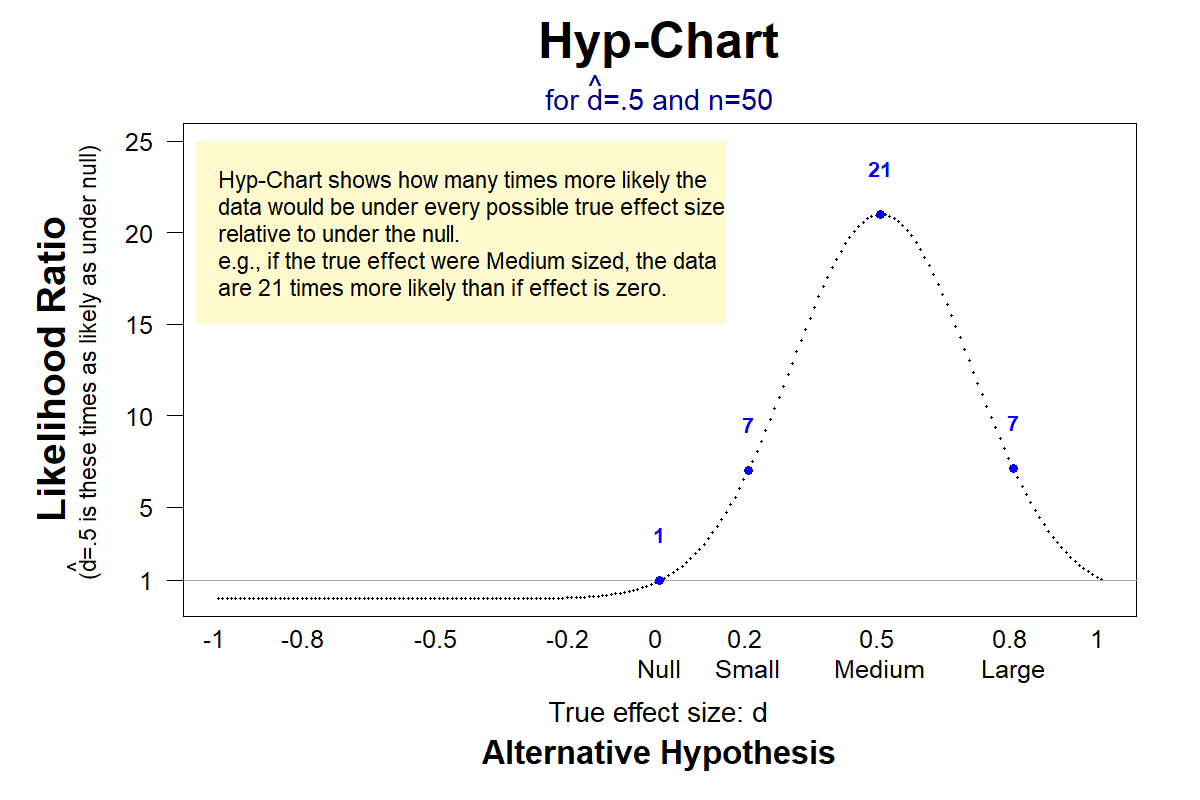 Getting a feel for Hyp-Chart
The motivation for going beyond p-values, remember, was to look at alternative hypotheses, and not just the null hypothesis.  To illustrate how Hyp-Chart achieves this, Figure 6 depicts Hyp-Charts for the same p-value, p=.02, but different sample sizes (n=100 vs n=500), and thus different observed effect sizes ( d̂ =.33 & d̂ =.15). 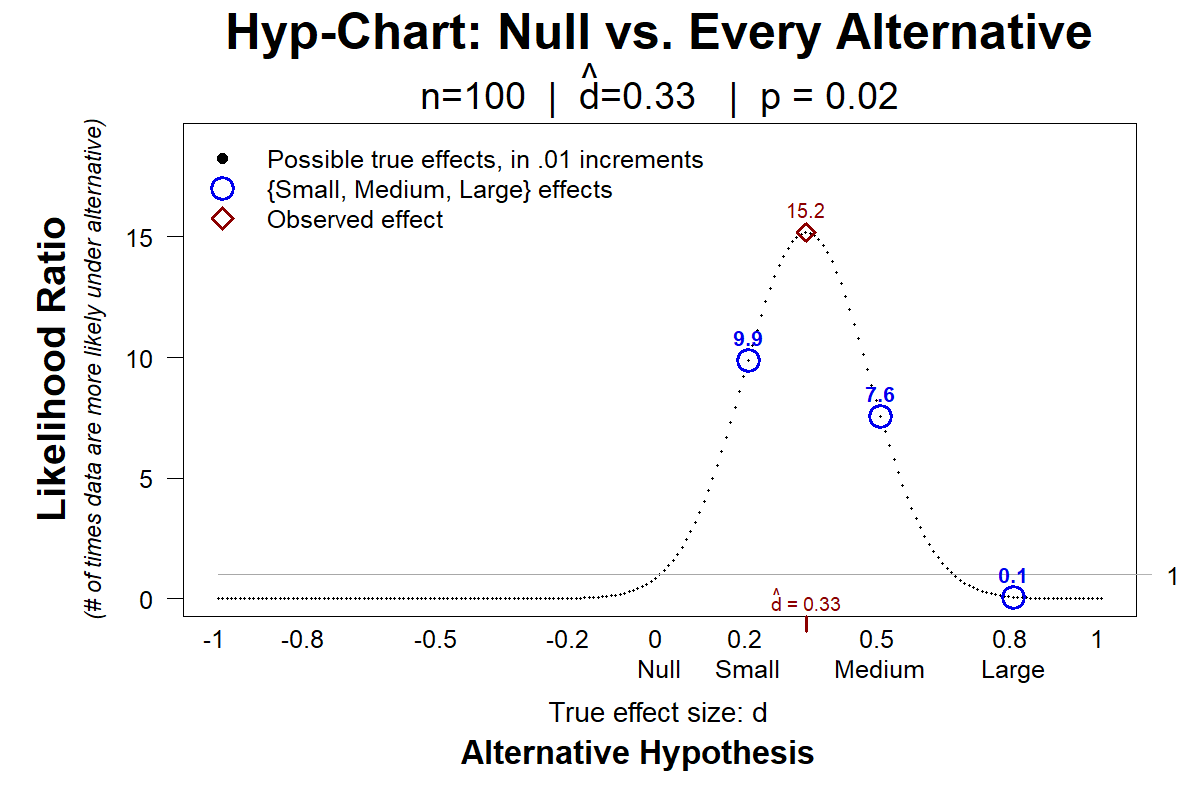 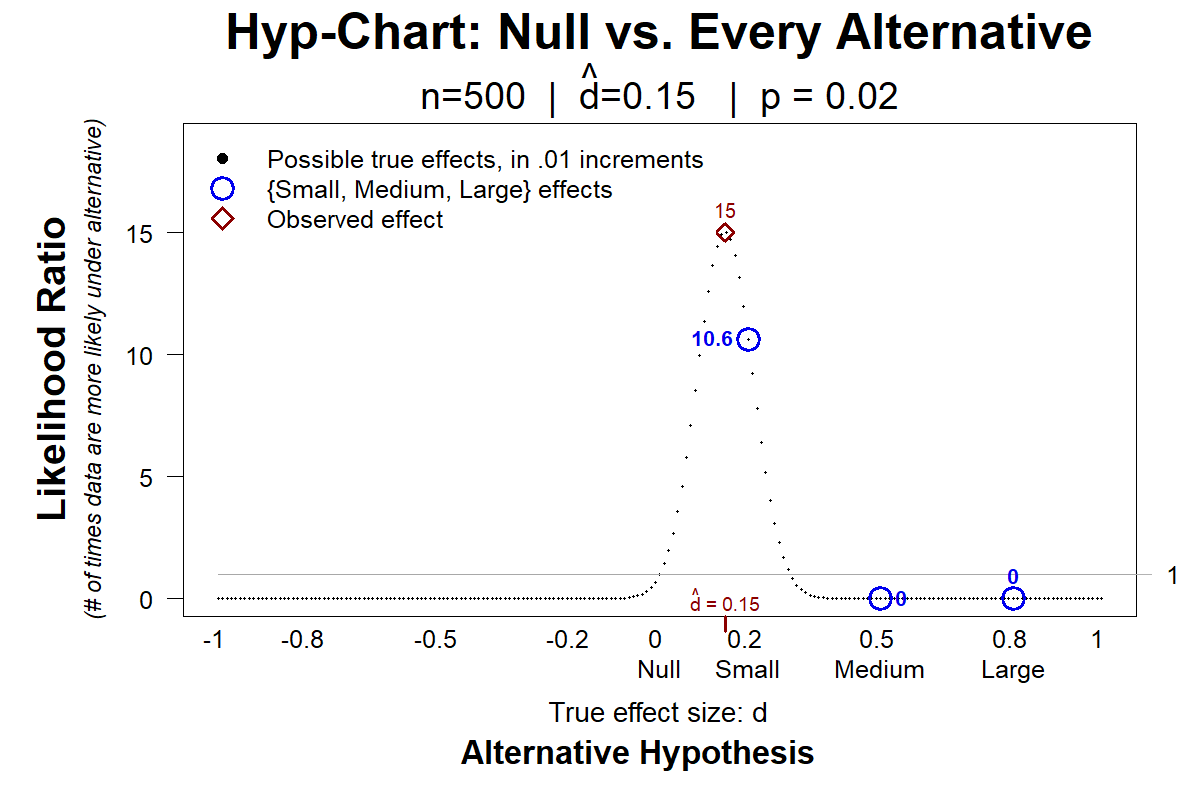 In contrast, it does not seem reasonable for social scientists at least, to go further, to take the second step, and compute a Bayes factor. OK. Let's see what that second step is.

Step 2: The Bayes factor is a (bad) summary of Hyp-Chart
Like Hyp-Charts, Bayes factors compare the likelihood of the data under the null vs “the alternative”. What's different is that instead of reporting results for each possible effect, the Bayes factor reports only one number, a single (weighted) average across all the likelihoods in Hyp-Chart. [4].

Figure 7 below illustrates how default Bayes factors average a Hyp-Chart to evaluate “the alternative”.

Fig 7. A Bayes factor vs its underlying Hyp-Chart

The figure is just like the previous Figure 6, but the size of the dots is proportional to the weight given by the default Bayes factor.

The weighted average is BF=1. The Bayes factor, then, summarizes the above Hyp-Chart by saying that the null and ‘the alternative’ are equally consistent with the data.  That d̂ =.15 is just as likely if dtrue=0 as if "the alternative" is true.

Bayes factors change their mind about what ‘the alternative’ is.
Hyp-Chart helps convey another reason why I don’t use Bayes factors

This is not something Bayesian advocates don’t know. But it is something that does not bother them [6], and that I think would bother most social scientists.

To illustrate, let’s consider the observed d̂=.15 we have used a few times.

Let’s dive deeper into these two scenarios, this time aided by Hyp-Charts.

Getting d̂=.15 with just n=150 is an inconclusive result, for sure, note that p=.19 after all. But that result is 2.1 times more consistent with a small effect of d=.2 than with the null. The Bayes factor, however, does not call this study inconclusive. After averaging that 2.1 with lots of 0s from hypotheses with the opposite sign, and hypotheses for quite large effects – hypotheses we have no specific reason to expect or predict or care about – it computes a low average, a low Bayes factor, BF<1/3, so d̂=.15 “supports the null”.

The conclusion reverses, for the same result, d̂=.15, with a larger sample,

Take home.
Reporting a Bayes factor seems like an unnecessary reduction, and distortion, of the available information contained in a Hyp-Chart. If you review a paper that reports a Bayes factor, I recommend you ask the authors to include a Hyp-Chart alongside it. This will allow readers to interpret the data using their actual prior beliefs and actual theories of interest, instead of using the (irrelevant) average prediction, made by a default hypothesis they don't hold (or understand).

This is the second post in the Bayes factors series, see the first: Colada[78A]

Feedback
I shared a draft of this post with Felix Schönbrodt (.htm), and Leonhard Held (.htm) who have written on Bayes factors in the context of hypothesis testing, and with Bence Palfi (@bence_palfi), a PhD student from Essex who had identified an imprecision/error in my previous post (Colada[78a]). A parallel conversation with Zoltan Dienes (.htm), following that post was also useful. They were all polite, respectful, and helpful, despite having different summary evaluations of the usefulness of Bayes factors. Thanks.