In this sixth installment of Data Replicada, we report our attempt to replicate a recently published Journal of Consumer Research (JCR) article entitled, “The Impact of Resource Scarcity on Price-Quality Judgments” (.html).

This one was full of surprises.

The primary thesis of this article is straightforward: “Scarcity decreases consumers’ tendency to use price to judge product quality.” It reports six studies, three of which were conducted on MTurk. We chose to replicate Study 2A (N = 149) because it was the MTurk study with the strongest evidence, and because it also tested the effects of scarcity on two other measures: desire for abundance and categorization tendency (described below).

In this study, participants were randomly assigned to complete a writing task that was designed to either induce a feeling of scarcity or not. They then rated their desire for abundance, completed a task designed to measure their categorization tendency, and then judged the quality of 10 computer monitors based solely on their prices. The estimated correlation between price and quality served as the authors’ primary dependent variable. Writing about scarce resources increased the desire for abundance (p = .006), lowered categorization tendency (p < .001), and, most importantly, reduced the judged correlation between quality judgments and prices (p = .020) [1].

We contacted the authors to request the materials needed to conduct a replication. Unfortunately, the first author could not locate the original Qualtrics file, but he did send us a document containing a detailed summary of the methods. In general, the authors were forthcoming and polite, doing their best to answer all of our questions about how to best design our replication. We are very grateful to them for their help and professionalism.

In our replication, we tried our best to follow the procedures the authors outlined for us. There were, however, necessarily a few deviations, which we detail in this footnote: [2]. Also, in collaboration with the original authors, we tried our best to use exclusion criteria that made sense. You can access our Qualtrics surveys here (.qsf), our materials here (.pdf), our data here (.csv), our codebook here (.xlsx), and our R code here (.R).

In this study, participants began by completing a writing task borrowed from Roux, Goldsmith, and Bonezzi (2015; .pdf). This served as the critical manipulation of scarcity. You’re going to want to look at this manipulation closely, because it affected participants in surprising ways:

Participants then completed a measure that the authors dubbed “Categorization Tendency.” To assess this, participants were first shown these four shapes:

They were then asked to rate how much they agreed or disagreed with the following statements (1 = Strongly Disagree and 7 = Strongly Agree):

Responses to these four statements were reverse-coded and then averaged, so that higher scores indicated a greater tendency to disagree with them.

Before moving on, and to foreshadow some of what comes next, it is worth thinking about what this measure is capturing. On the one hand, it might represent a meaningful measure of a person’s tendency to categorize things. On the other hand, it might operate as an attention check, as it is arguably strange for a person who comprehends these statements to strongly agree with them. For example, it is arguably strange to strongly agree that a black square is dissimilar to both a black circle and a white square. Indeed, the modal response to all four statements was “Strongly Disagree,” while the least popular response was “Strongly Agree.”

After completing the categorization task, participants were asked to rate the quality of 10 computer monitors given only their prices. Each monitor was displayed on its own screen. Here’s what it looked like: 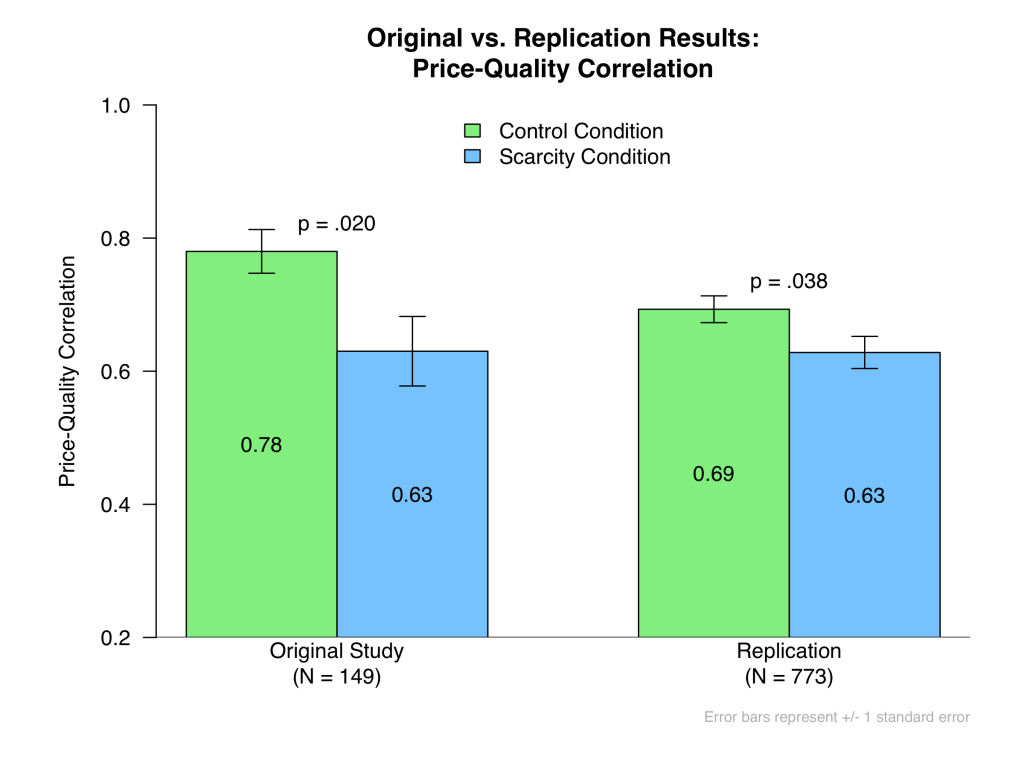 In addition, although the writing task did not significantly influence Desire For Abundance (d = .08), it did have a very significant effect on Categorization Tendency (d = .22):

So although our observed effects were much smaller than in the original study, this looks like at least a partial success. . .

Except, there is a very big problem: 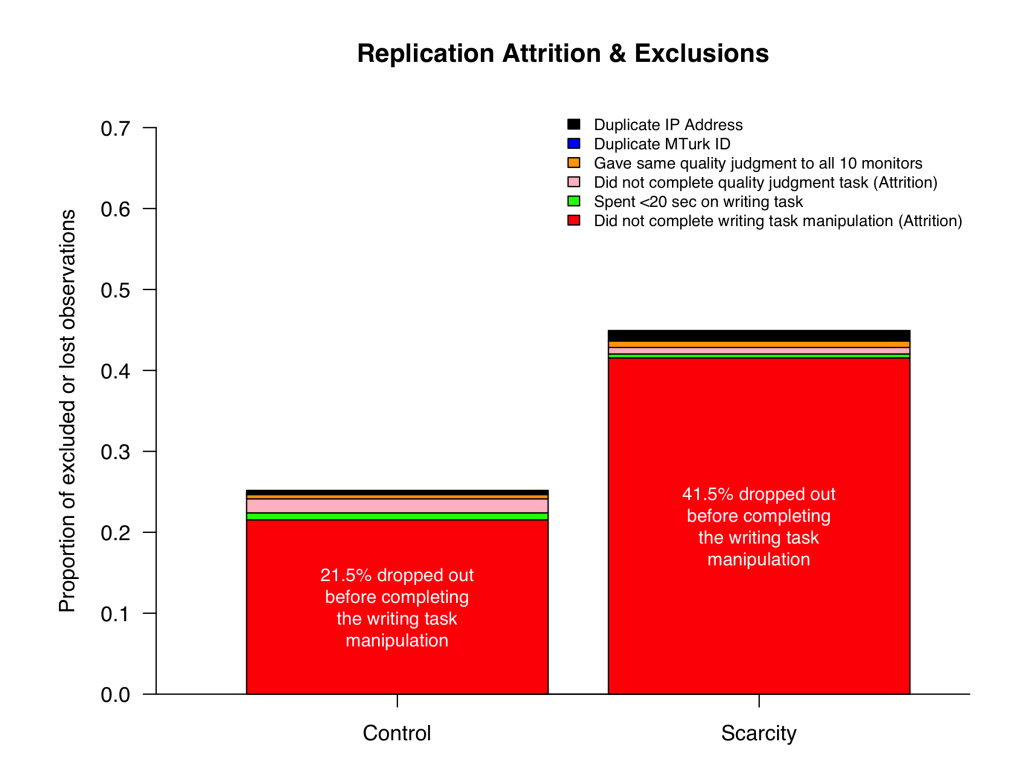 The above graph shows all of the dropouts and pre-registered exclusions in each of the two conditions. You can see that participants who encountered the Scarcity writing task were much more likely to drop out than those who encountered the Control writing task. This differential attrition means that random assignment was compromised, that the people who completed the measures in the Scarcity condition were probably different from those who completed the measures in the Control condition [4].

Well, it turns out that good participants – those who follow instructions and honestly answer questions – were more likely to drop out of the Scarcity condition. Surprised? Yeah, us too. But here’s how to make sense of it.

Imagine Lisa is a good, honest participant, while Mr. Burns is a bad, corruptible participant who just wants to get paid. If they are assigned to the Control condition, they are asked to write three things they did last week. This is simple enough for both Lisa to do (honestly) and for Mr. Burns to do (honestly or dishonestly), so both of them do it. But if they are assigned to the Scarcity condition, they are asked to write about three times in which resources were scarce. Maybe this is prohibitively difficult for them to do honestly but easy for them to do dishonestly, in which case Lisa bails but Mr. Burns stays. The result is that the Scarcity condition has (1) fewer people overall and (2) a disproportionate share of Mr. Burnses.

Now, in the context of this study, how can having more bad participants in the Scarcity condition cause the results described above? It will be helpful to answer this question with data. To provide that data, Joe (painstakingly) coded all of the written responses submitted by participants. Participants who sensibly followed the instructions were coded as “Good”; participants who did not were coded as “Bad” [5].

Here are the price-quality correlation results, broken down by Good vs. Bad Responders: 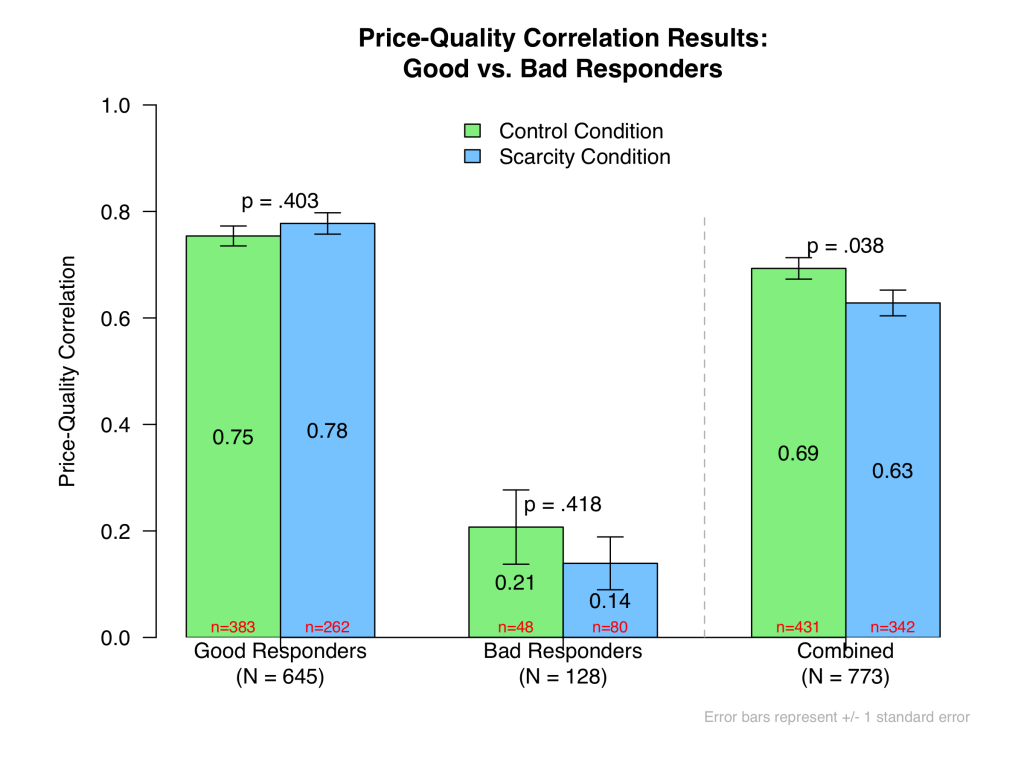 Now, when you combine the fact that Bad Responders make up a disproportionate share of the Scarcity condition with the fact that Bad Responders are, by virtue of their sometimes meaningless responses, more likely to exhibit small price-quality correlations, you achieve the overall result, whereby those in the Scarcity condition exhibit smaller price-quality correlations. Here’s a picture that illustrates this: 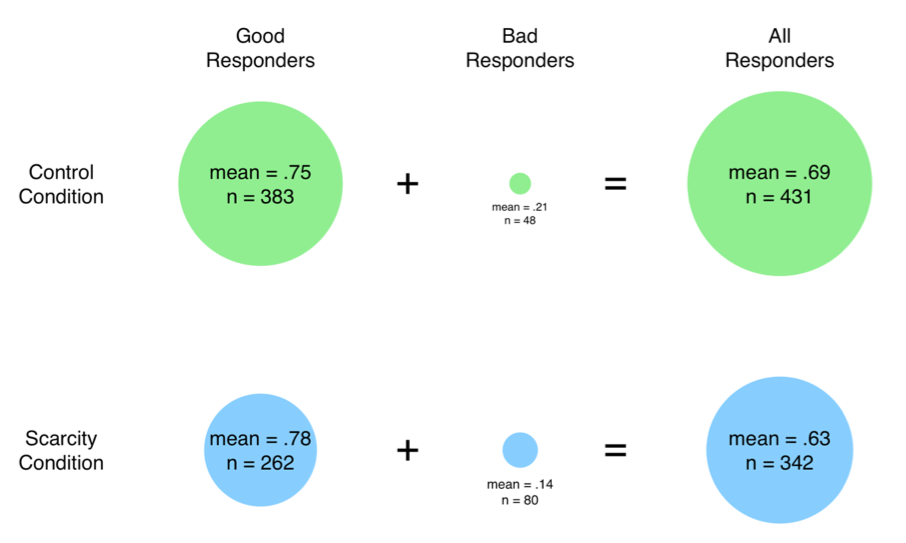 OK, but what about the other measures? Same story.

Again, this makes sense. Recall that the Categorization Tendency measure is reverse-coded, and that it is comprised of four items that most humans will not agree with. Thus, most people who fully comprehend these items should score low on Categorization Tendency [6]. The Good Responders don’t agree with them, but the Bad Responders do, probably because they default to answering at the high end of rating scales (a possibility that would also explain the Desire For Abundance results).

So, what have we learned?

As has been recently emphasized (.html), differential attrition is a real thing to worry about, especially in studies in which one task is even slightly more onerous, difficult, or weird than another.

Nevertheless, the jury is still out because a true test of this hypothesis would require conducting a study that eliminates the problem of differential attrition.

We actually tried to do this [7]. In a pre-registered study (https://aspredicted.org/md5q8.pdf; N = 2,101), we randomly assigned half of our participants to a condition in which they were (1) warned they would have to do an onerous vowel-counting task as well as the writing task, (2) explicitly asked whether they wanted to continue despite that, and (3) actually did the vowel-counting task. This all happened before they were assigned to the Control vs. Scarcity writing task. Our hope was that Bad Responders would be caught before the writing task, either because they dropped out of the study or because they performed poorly on the vowel counting task (in which case we preregistered to exclude them). A full writeup of this study is here: .pdf.

So then we gave up, and decided to call the whole thing “inconclusive.”

It turns out that eliminating differential attrition is hard. And why shouldn’t it be? Research is hard. Life is hard.

We appreciate the importance of the replication effort and are glad you are doing this work. We thank you for being so cooperative during the preparation process. We are also happy that most of our effects emerged as hypothesized in your replication study.

A close look at your results has led us to identify a couple of important issues. First, what constitutes a “good” and “bad” responder? This is an immensely important (and difficult to answer) question that impacts a tremendous amount of behavioral research. The criteria you applied to the replication study showed a disproportionate number of bad responders in the scarcity (vs. control) condition, thus creating a confound between “participant goodness” and resource scarcity as potential drivers of our documented effects. To further address this issue, we went back to our original data and re-examined participant responses across conditions. First, we looked at criteria you used as indicators of bad responders to see if they varied as a function of scarcity vs. control condition. However, in our data, the percentage of participants giving poor quality responses in the writing task did not differ across conditions (p=.50). Also, the average time spent completing the writing task (p=.87) and the variance of the time spent on the writing task (p=.63) did not differ by condition. Another indicator of bad responders, the percentage of participants giving the same quality rating to all 10 computer monitors also did not differ across conditions (p=.29, although we should note that these numbers were very small). Further, if there are disproportionately more “bad” responders in the scarcity (vs. control) condition, it seems reasonable to expect greater variance in participant responses in the scarcity (vs. control) condition due to bad responders giving answers that are not contingent on experimental stimuli (i.e., more random and noisy). However, neither the variance of price-quality correlations (p>.99), desire for abundance (p=.52), nor categorization tendency (p=.12) differed in the scarcity (vs. control) condition.

Participants’ motivations for quitting when confronted with the scarcity writing task is also worth further discussion. One possibility, as you suggest, is that the scarcity writing task “is prohibitively difficult for [participants] to do honestly but easy for them to do dishonestly,” and thus that “bad” (vs. “good”) responders are more likely to stay (vs. drop out) in the scarcity condition. It is also possible, however, that bad responders might also have more difficulty within the narrower response domain in the scarcity condition (e.g., generating a fake scarcity experience that they never had). Also, given that scarcity is a pervasive aspect of human life (Booth 1984; Lynn 1991), genuine scarcity-related experiences might be easily accessible to good responders. In any case, we appreciate you bringing up this valuable point.

Reading this web article has given us an increased appreciation of the importance of the differential attrition phenomenon and the impact it can have on experimental findings. We applaud the Data Replicada team’s efforts to illustrate that phenomenon and we will definitely be more aware of this issue in the future. We encourage other researchers to carefully consider this as well."