It’s a famous study. Give a mug to a random subset of a group of people. Then ask those who got the mug (the sellers) to tell you the lowest price they’d sell the mug for, and ask those who didn’t get the mug (the buyers) to tell you the highest price they’d pay for the mug. You’ll find that sellers’ minimum selling prices exceed buyers’ maximum buying prices by a factor of 2 or 3 (.pdf).

But a 2012 paper by Ray Weaver and Shane Frederick convincingly shows that loss aversion is not the cause of the endowment effect (.html). Instead, “the endowment effect is often better understood as the reluctance to trade on unfavorable terms,” in other words “as an aversion to bad deals.” [1]

This paper changed how I think about the endowment effect, and so I wanted to write about it.

A Reference Price Theory Of The Endowment Effect

To see how this produces the endowment effect, imagine you are willing to pay $1 for the mug and you believe it usually sells for $3. As a buyer, you won’t pay more than $1, because you don’t want to pay more than it’s worth to you. But as a seller, you don’t want to sell for as little as $1, because you’ll feel like a chump selling it for much less than it is worth. [3]. Thus, because there’s a gap between people’s perception of the market price and their valuation of the mug, there’ll be a large gap between selling ($3) and buying ($1) prices:

Weaver and Frederick predict that the endowment effect will arise whenever market prices differ from valuations.

However, when market prices are not different from valuations, you shouldn’t see the endowment effect. For example, if people value a mug at $2 and also think that its market price is $2, then both buyers and sellers will price it at $2: 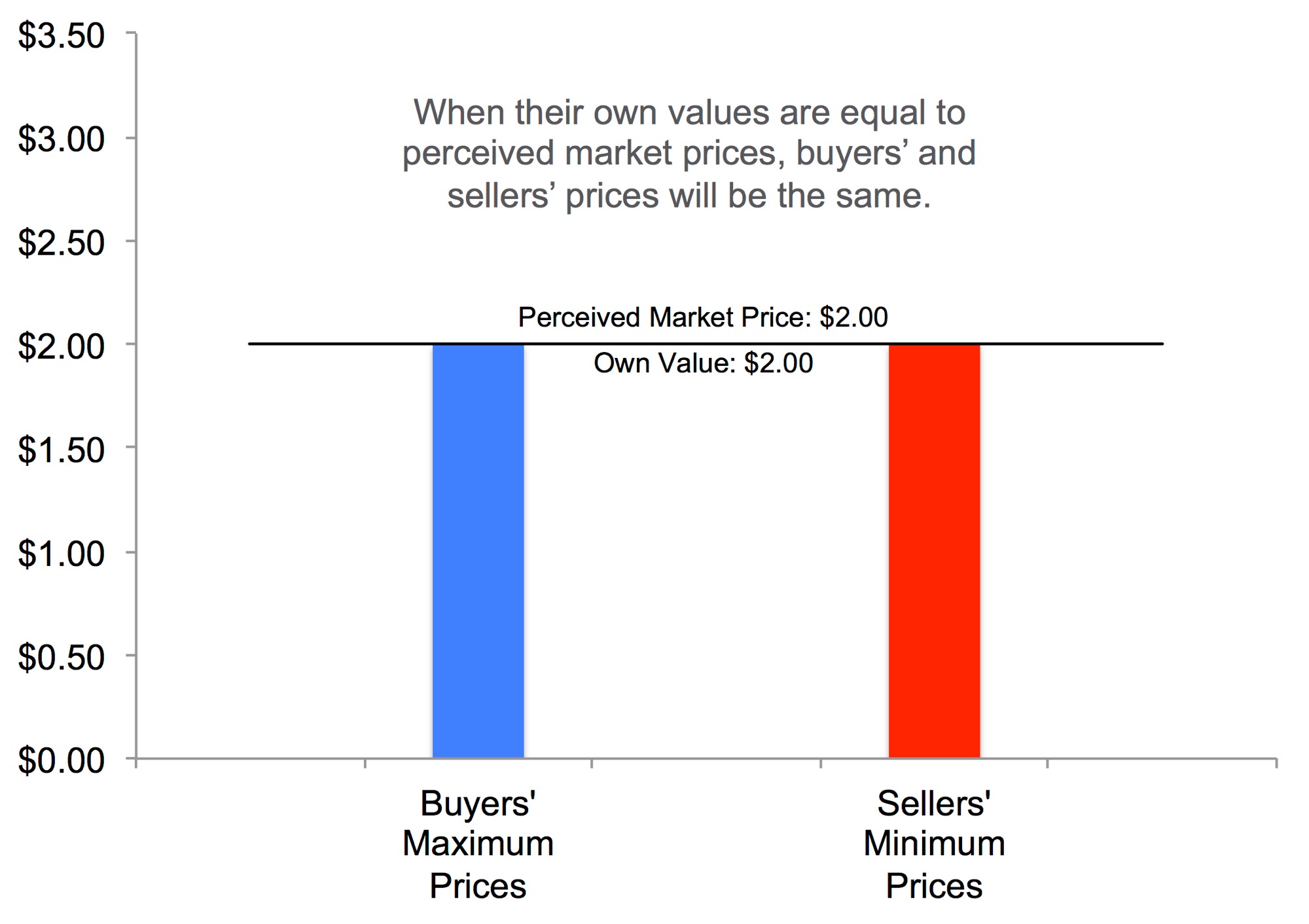 And this is what Weaver and Frederick find. Repeatedly. There is no endowment effect when valuations are equal to perceived market prices. Wow.

Just to be sure, I ran a within-subjects hypothetical study that is much inferior to Weaver and Frederick’s between-subjects incentivized studies, and, although my unusual design produced some unusual results, I found strong support for their hypothesis (full description .pdf; data .xls). Most importantly, I found that people who gave higher selling prices than buying prices for the same good were much more likely to say they did this because they wanted to avoid a bad deal than because of loss aversion: 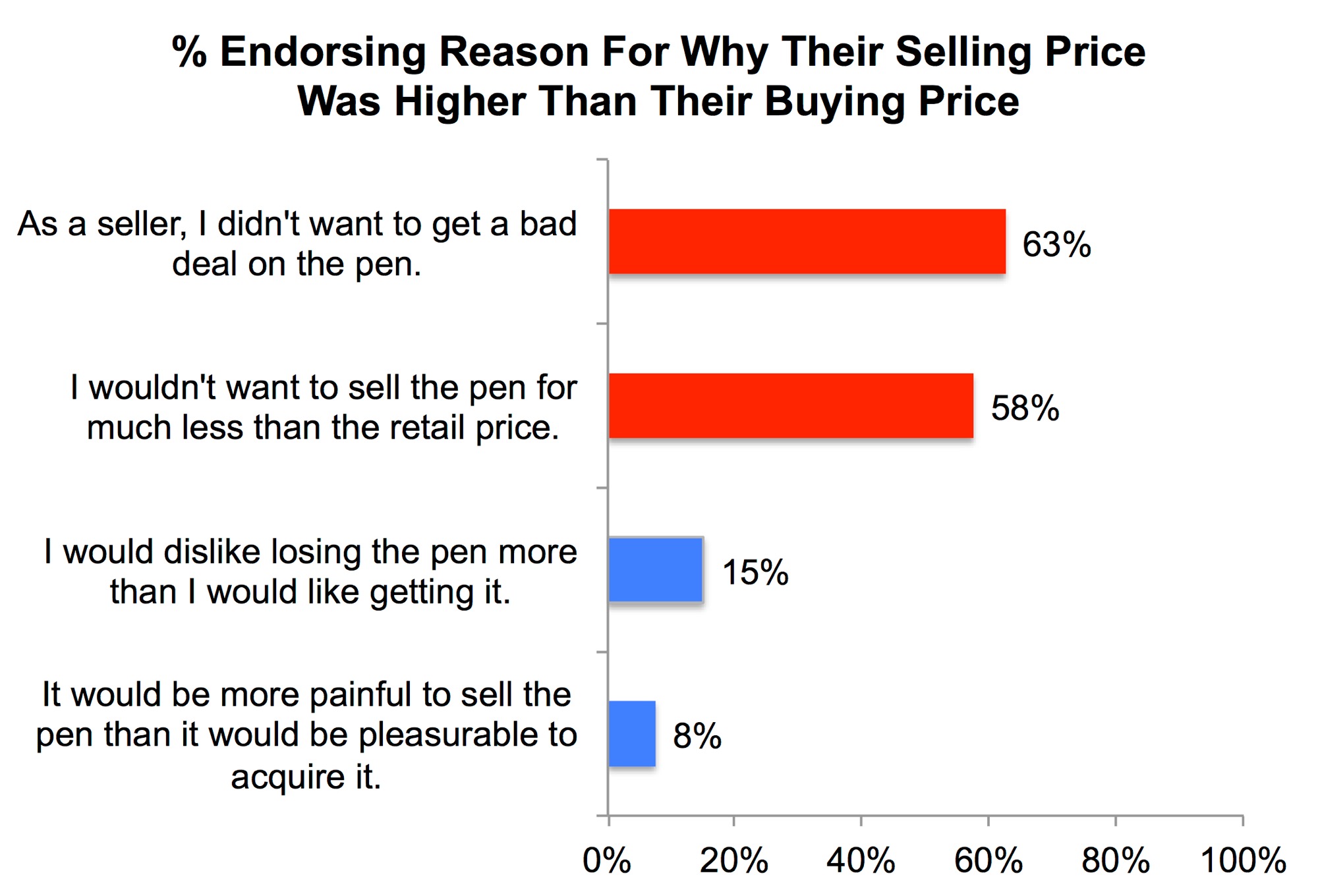 I think Weaver and Frederick’s evidence makes it difficult to consider loss aversion the best explanation of the endowment effect. Loss aversion can’t explain why the endowment effect is so sensitive to the difference between market prices and valuations, and it certainly can’t explain why the effect vanishes when market prices and valuations converge. [5]

Weaver and Frederick’s theory is simple, plausible, supported by the data, and doesn’t assume that people treat losses differently than gains. It just assumes that, when setting prices, people consider both their valuations and market prices, and dislike feeling like a sucker.

Author feedback.
I shared an early draft of this post with Shane Frederick. Although he opted not to comment publicly, during our exchange I did learn of an unrelated short (and excellent) piece that he wrote that contains a pretty awesome footnote (.html).