When considering any statistical tool I think it is useful to answer the following two practical questions:

1. “Does it give reasonable answers in realistic circumstances?”
2. “Does it answer a question I am interested in?”

In this post I explain why, for me, when it comes to the default Bayesian test that's starting to pop up in some psychology publications, the answer to both questions is “no.”

The Bayesian test
The Bayesian approach to testing hypotheses is neat and compelling. In principle. [1]

The p-value assesses only how incompatible the data are with the null hypothesis. The Bayesian approach, in contrast, assesses the relative compatibility of the data with a null vs an alternative hypothesis.

The devil is in choosing that alternative.  If the effect is not zero, what is it?

Bayesian advocates in psychology have proposed using a “default” alternative (Rouder et al 1999, .pdf). This default is used in the online (.html) and R based (.html) Bayes factor calculators. The original papers do warn attentive readers that the default can be replaced with alternatives informed by expertise or beliefs (see especially Dienes 2011 .pdf), but most researchers leave the default unchanged. [2]

This post is written with that majority of default following researchers in mind. I explain why, for me, when running the default Bayesian test, the answer to Questions 1 & 2 is "no" .

Question 1. “Does it give reasonable answers in realistic circumstances?”
No. It is prejudiced against small effects

The default alternative hypothesis used in the Bayesian test is a bit more complicated. It is a distribution, so more like Ha: d~N(0,1). So we ask if the data are more compatible with zero or with d~N(0,1). [3]

That the alternative is a distribution makes it difficult to think about the test intuitively.  Let's not worry about that. The key thing for us is that that default is prejudiced against small effects. 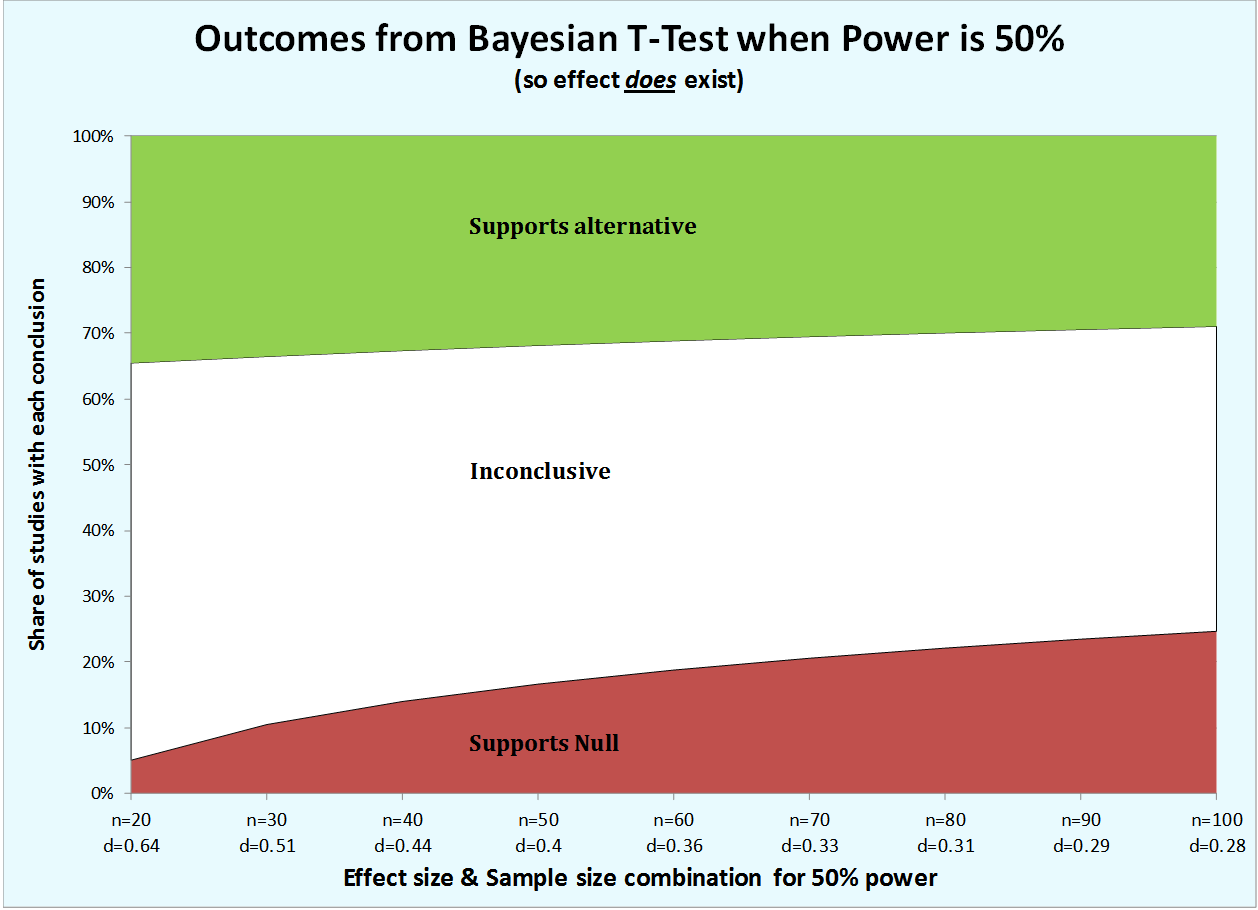 The Bayesian test erroneously supports the null about 5% of the time when the effect is biggish, d=.64, but it does so five times more frequently when it is smallish, d=.28.  The smaller the effect (for studies with a given level of power), the more likely we are to dismiss its existence.  We are prejudiced against small effects. [5]

Demo 2. Facebook
For a more tangible example consider the Facebook experiment (.html) that found that seeing images of friends who voted (see panel a below) increased voting by 0.39% (panel b).

While the null of a zero effect is rejected (p=.02) and hence the entire confidence interval for the effect is above zero, [6] the Bayesian test concludes VERY strongly in favor of the null, 35:1. (R Code)

Prejudiced against (in this case very) small effects.

Question 2. “Does it answer a question I am interested in?”
No. I am not interested in how well data support one elegant distribution.

But that’s not quite right. What they actually ought to write is
"The data support the null more than they support one mathematically elegant alternative hypothesis I compared it to"

Saying a Bayesian test “supports the null” in absolute terms seems as fallacious to me as interpreting the p-value as the probability that the null is false.

1. Andrew Gelman  Expressed "100% agreement" with my argument but thought I should make it clearer this is not the only Bayesian approach, e.g., he writes "You can spend your entire life doing Bayesian inference without ever computing these Bayesian Factors." I made several edits in response to his suggestions, including changing the title.

2. Jeff Rouder  Provided additional feedback and also wrote a formal reply (.html). He begins highlighting the importance of comparing p-values and Bayesian Factors when -as is the case in reality- we don't know if the effect does or does not exist, and the paramount importance for science of subjecting specific predictions to data analysis (again, full reply: .html)

3. EJ Wagenmakers Provided feedback on terminology, the poetic response that follows, and a more in-depth critique of confidence intervals (.pdf)

In a desert of incoherent frequentist testing there blooms a Bayesian flower. You may not think it is a perfect flower. Its color may not appeal to you, and it may even have a thorn. But it is a flower, in the middle of a desert. Instead of critiquing the color of the flower, or the prickliness of its thorn, you might consider planting your own flower — with a different color, and perhaps without the thorn. Then everybody can benefit.”