The best way to address the problem of imperfect planning is to plan more perfectly: to preregister your studies. Preregistrations are time-stamped documents in which researchers specify exactly how they plan to collect their data and to conduct their key confirmatory analyses. The goal of a preregistration is to make it easy to distinguish between planned, confirmatory analyses – those for which statistical significance is meaningful – and unplanned exploratory analyses – those for which statistical significance is not meaningful [1]. Because a good preregistration prevents researchers from p-hacking, it also protects them from suspicions of p-hacking [2].

But if preregistration is going to be the solution, then we need to ensure that it is done right. After casually reviewing several recent preregistration attempts in published papers, we noticed that there is room for improvement. We saw two kinds of problems.

Problem 1. Not enough information
For example, we saw one “preregistration” that was simply a time-stamped abstract of the project; it contained almost no details about how data were going to be collected and analyzed. Others failed to specify one or more critical aspects of the analysis: sample size, rules for exclusions, or how the dependent variable would be scored (in a case for which there were many ways to score it). These preregistrations are time-stamped, but they lack the other critical ingredient: precise planning.

This means that your preregistration needs to be sufficiently exhaustive and sufficiently specific. If you say, “We will exclude participants who are distracted,” Leif could think, “Right, but distracted how? Did you define “distracted” in advance?” It is better to say, “We will exclude participants who incorrectly answered at least 2 out of our 3 comprehension checks.” If you say, “We will measure happiness,” Leif could think, “Right, but aren’t there a number of ways to measure it? I wonder if this was the only one they tried or if it was just the one they most wanted to report after the data came in?” So it’s better to say, “Our dependent variable is happiness, which we will measure by asking people ‘How happy do you feel right now?’ on a scale ranging from 1 (not at all happy) to 7 (extremely happy).”

If including something in a preregistration would make Leif less likely to wonder whether you p-hacked, then include it.

To decide which information to exclude in your preregistration, you can again imagine that a skeptical Leif is reading your paper, but this time you can ask, “If I leave this out, will Leif be more concerned that my results are attributable to p-hacking?”

For example, if you leave out the literature review from your preregistration, will Leif now be more concerned? Of course not, as your literature review does not affect how much flexibility you have in your key analysis. If you leave out how long people spent in the lab, how many different RAs you are using, why you think your hypothesis is interesting, or the description of your exploratory analyses, will Leif be more concerned? No, because none of those things affect the fact that your analyses are confirmatory.

If excluding something from a preregistration would not make Leif more likely to wonder whether you p-hacked, then you should exclude it.

The Takeaway
Thus, a good preregistration needs to have two features:

We designed AsPredicted.org with these goals in mind. The website poses a standardized set of questions asking you only to include what needs to be included, thus also making it obvious what does not need to be. The OSF offers lots of flexibility, but they also offer an AsPredicted template here: https://osf.io/fnsb/ [5].

Still, even on AsPredicted, it is possible to get it wrong, by, for example, not being specific enough in your answers to the questions it poses. This table provides an example of how to wrongly and properly answer these questions. 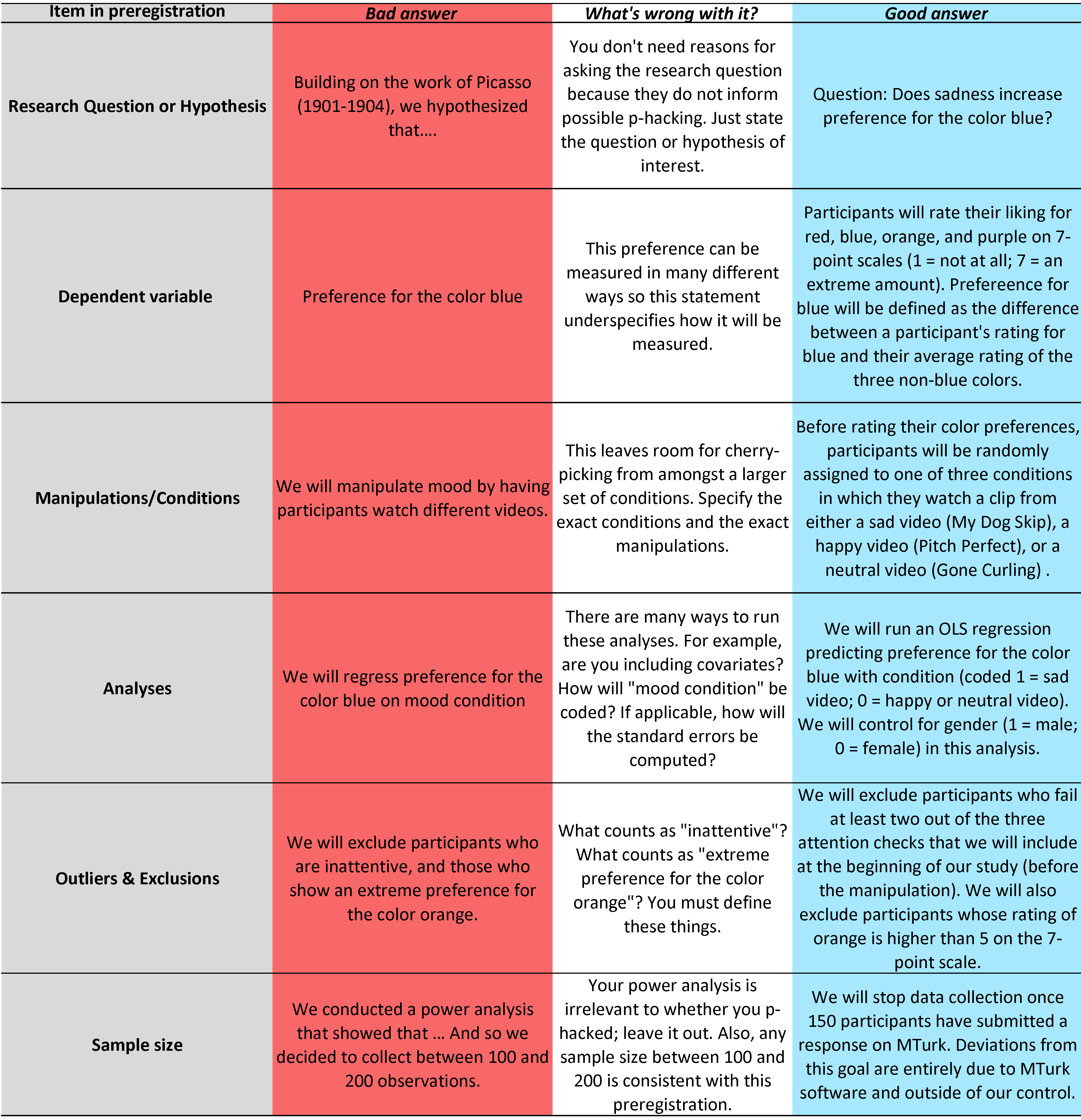 Feedback
We would like to thank Stephen Lindsay and Simine Vazire for taking time out of their incredibly busy schedules to give us invaluable feedback on a previous version of this post.